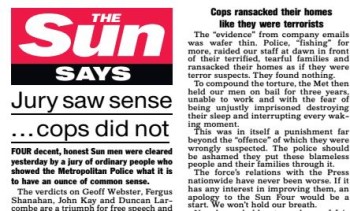 A screenshot of the Sun's column on the not guilty verdicts for four staff. (Credit: Sun, Twitter, screenshot)

Four Sun journalists were found not guilty of bribery, Reuters reported, even though one of the officials pleaded guilty and was put in jail.

One of Kay’s sources made £100,000 by selling stories, the Telegraph reported. While Kay and his bosses, Shanahan and Webster, were off-the-hook, his source, former Ministry of Defense employee Bettina Jordan-Barber, was found guilty and given a one-year sentence. Jordan-Barber had pleaded guilty, according to the BBC.

Larcombe paid an official at Sandhust Royal Military Academy more than £23,700 for stories about Princes William and Harry.  In addition to Larcombe being cleared, the man he paid, John Hardy and his wife, who accepted payments from the Sun for her husband, were both found not guilty as well, the Telegraph reported.

Larcombe said only 24 of the more than 2,000 stories he produced for the Sun were in question, as iMediaEthics previously reported. He denied that he had “done anything wrong” during the trial. He said he didn’t think he broke any laws and that following his arrest, “one of the things I found particularly upsetting was an accusation that I was in some way knowingly corrupting a soldier.”

After being found not guilty, Larcombe said, according to Reuters: “There is no celebration whilst this witch hunt continues against my colleagues who are still facing the nightmare that I hopefully one day will wake up from.”

In addition, Shanahan called the trial a “terrible ordeal,” the BBC reported.

“So far only two former News of the World reporters have been found guilty for such payments” to public officials,” according to Reuters. “Former police officers and prison officers have also been convicted and are serving jail terms.” In total, the Crown Prosecution Service has “brought to trial 24 journalists from the Sun and other tabloids” the Guardian reported, with the recent not guilty verdicts being a “major blow” to the prosecution.

A spokesperson for the Sun pointed iMediaEthics to its leader column about the news, “Jury saw sense … cops did not.”

The column called the verdicts “a triumph for free speech and for British justice and its jury system.”

“They show that the public had no appetite to convict and jail journalists for printing the truth,” the column stated.

“The verdicts are also a condemnation of the CPS,” the column went on, adding that the Sun “never doubted the innocence of our men.”

See the column below.