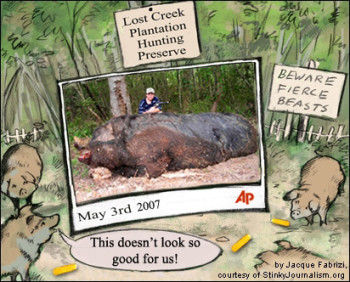 Editor’s Note : Rhonda Roland Shearer is the director of Art Science Research Laboratory, which she founded with her late husband Stephen Jay Gould. The New York-based think tank promotes cross-disciplinary studies and supports a journalism ethics program that publishes StinkyJournalism.org, a site bent on debunking erroneous media. She and her colleagues have put hundreds of hours into investigating the claims around a “monster” pig kill in Alabama last year, which they see as a case study in how to create an international media hoax. Because the investigation involves hunting law and ethics, she has written this second report for ESPNOutdoors.com, to be published simultaneously on iMediaEthics.

Exclusive to ESPNOutdoors.com In January, a Clay County grand jury was to decide if the Monster Pig hunters committed animal cruelty. The public never heard that the District Attorney who was to prosecute the case suddenly canceled . Now in April, another surprise. A National Geographic UK film crew is in Alabama filming “Anatomy of a Hoax” about the monster hog killing. With all the unexpected twists and turns in this case, what else should the public know? Fred the pig may be dead but the consequences of his killing continue.

On May 3rd, 2007, an eleven year old boy, Jamison Stone, from Pickensville, Alabama,  made international news that spread like wildfire over the Associated Press wire services. The now infamous photograph shows a fresh faced boy kneeling behind a monster-sized pig. The hog was shot in the backwoods with a giant 50 caliber Smith & Wesson hand gun that later turned out to be, like the hunt itself, a hoax. 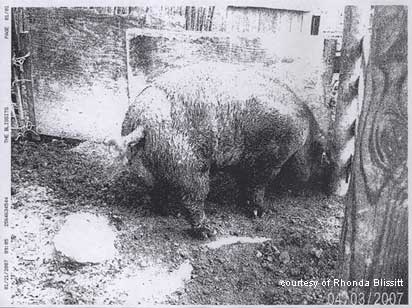 Alabama Wildlife and Freshwater Fisheries quickly revealed that it was a farm animal, and not a wild boar, that was shot in the 150 acre low-fence area. It was an overfed pet, and gentle domestic Duroc swine, named Fred. My investigation uncovered the darker tale that went mostly unreported by mainstream media.The owner of Lost Creek Plantation— the canned hunting operation– Eddy Borden, along with owners of Southeastern Trophy Hunters Keith O’Neil and Charles Williams, modeled their marketing scheme after the enormously successful Hogzilla shooting in Georgia that National Geographic turned into a 2005 record-breaking documentary.

Their flimflam plan was to buy a dark hairy fat farm hog, and sell it to a greenhorn as a “once in a lifetime” opportunity. The advertisement promised that a 1,000 pound monster boar was “roaming the wilds” of the Lineville plantation even before they picked Fred up from the farm.To save face, Mike Stone, Jamison’s father, continued to tell a heroic tale about what happened on May 3, 2007. However, the ugly bottom line still showed –and the public noticed. Mike Stone said that for three hours, Jamison repeatedly wounded the hog with no kill shot. Stone told me that a local TV station said to the hunters that “if they wanted a news story, only the boy could shoot the pig– no adults.”

So the three professional hunters, Borden, Williams and O’Neil, armed with rifles, stood by for hours and watched as the hog eventually bled out in order to, ultimately, promote their hunting business.Citizens, including hunters, from around the world were outraged. Greed had sadly replaced the long-held hunters’ ethic of a quick and humane kill, and put hunting itself and Alabama’s global reputation in the cross-hairs. Clay County District Attorney Fred Thompson, in response, asked the sheriff to investigate the hunters for possible animal cruelty charges. As I reported in a January ESPNOutdoors.com exclusive, Lt. Steve Cotney, of the Clay County Sheriff’s office was ready to testify in a secret grand jury the week of January 28th.Consistent with the unexpected twists and turns in this case, and what the public has yet to learn since my story that a grand jury would convene, is that Lt. Cotney– to his great surprise– never got to testify.

He found out on the day he was suppose to report to the grand jury that after many months of hard work, DA Fred Thompson, without explanation, canceled the grand jury.“We’re just going to leave that alone,” Thompson told Cotney .Since then, Alabama’s Attorney General, Troy King, reviewed the Monster Pig case and told me there was too little time for his office to pursue the case before the one year statute of limitations ran out May 3, 2008 following the DA’s cancelation. He was also unsure whether or not Alabama animal cruelty laws would be applicable to the killing of a farm animal suddenly transposed into a hunter’s quarry.Allen Andress, Chief Enforcement Officer for Alabama Wildlife and Freshwater Fisheries Division, also declined to do any enforcement. He told me they had no jurisdiction.

Fred may have been hunted, but he was not a wild animal.Pet? Hunting quarry? Farm animal? Who was Fred? Facts support that one time or another he was all three. Authorities, so far, have not drawn the moral line, that the willful participation in the unnecessary slow and painful death of an animal–no matter if it’s a pet, prey or agricultural — is unlawful in the US or the State of Alabama,.Meanwhile, National Geographic’s UK film crew, Tigress Productions, is filming “Anatomy of a Hoax” to further delve into the ugly side of the monster pig killing. Producers told me that Mike Stone has agreed to be interviewed. Their 2005 documentary on Hogzilla, the Georgia plantation giant hog shooting, was for a long time, the second most watched program in the channel’s history.

The New York Times recently reported that many states are trying to combat the steep decline in hunting (as judged by the reduction of purchases of licenses). The further airing of this hoax in another round of negative international press exposure is a public relations disaster for Alabama as well as for hunting.What these three con men did on May 3, 2007 was not sport. They should not be allowed to give Alabama’s hunters and hunting traditions a black eye.I asked two vet pathologists and a doctor with expertise in pig surgery conducted for human research to examine the photographs of Fred’s carcass.

All three stated in their reports that there was no evidence of a kill shot among the many wounds up and down the animal’s two sides.Dr. Melinda Merck, a vet pathologist, writes, “Based on the lack of a conclusive kill shot and the prolonged time to die, the cause of death is most likely shock and exsanguinations [bleeding out] primarily from the injuries to the abdominal organs.” Dr Yi-Horng Lee, a surgeon, agrees that the abdominal injuries sustained from the ill- placed gun shot wounds “would have caused extreme pain and anxiety for a prolonged period of time.”A single well-placed higher velocity rifle shot by any one of the professional hunter guides would have quickly killed the animal.Now, it is up to Alabama US Attorney of the Northern District, Alice H. Martin. She is the last resort for justice for Fred and the hunting tradition of Alabama. 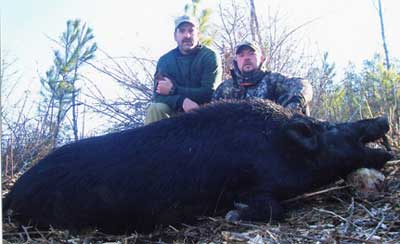 Eddy Borden, on left with hunting client at the now defunct Lost Creek Plantation, Lineville, Alabama. Note: Borden poses a considerable distance back from the hog. This “forced perspective” photo trick is often used by hunters and fishermen to create the illusion that the fish or, in this case, the pig, is larger than life. Photo Credit: Clay County Times