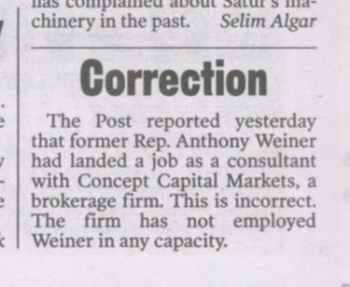 How could the New York Post have mixed up the infamous former Rep. Anthony Weiner with an Andrew Wiener, a man with a completely different name, in its Jan 10 story?

New York Magazine’s Kevin Roose fact checked the the New York Post’s Jan. 10 story that claimed the disgraced former U.S. congressman Anthony Weiner was hired by the broker/dealer firm Concept Capital Markets.  It rated a page 3 story position by Post editors but turned out to be untrue. The Post’s unnamed “sources” had gotten it wrong…or were the sources, in fact, hoaxers?

New York Magazine reported, “One possible cause of confusion…is that one of his employees is named Andrew Weiner.” New York Observer stated, ”There is an employee at Concept Capital with the surname Weiner, but his first name is Andrew, not Anthony. Yet another reason that it’s unfortunate to go through life with the last name Weiner.”

But iMediaEthics confirmed with the firm’s web page, and senior representatives who requested to remain unnamed (more on this below), that no Andrew Weiner, works at Concept Capital.  But an Andrew Wiener does. Both New York Magazine and New York Observer got it wrong. Apparently, neither one fact checked the spelling of Andrew’s last name. That’s New York media’s second fact check fail.

Here is the Jan 10 New York Post story that the editors yanked from its web site as it originally appeared –on page 3, no less–of the print edition.

We granted anonymity for two sources, something we have done only a few times in our ten-year history, because of the reasonable requests by two Concept Capital Markets executives. They asked that their names not be used as their company works primarily with institutions that, by nature, are conservative. A false claim of an affiliation with the sexting ex-congressman created unwanted media exposure. The less-senior of the executives also explained that they have become the brunt of jokes among their friends. “People are asking if Eliot Spitzer worked here too,” he said.

He continued, by phone, “He [Anthony Weiner] definitely doesn’t work here, that’s for sure…We are all shocked.”

A more senior Concept Capital executive informed iMediaEthics that New York Magazine was told:  “I don’t know Mr. Weiner.  I’ve never met Mr. Weiner.  No one here has talked to him.  We’re a relatively small firm and if we were going to hire him as a consultant I’m sure I would know about it and that’s basically what they said.”

“And it’s Andrew Wiener. It’s a different spelling as well,” he said. “They misspelled it in the New York Magazine” [and NY Observer].

“Andrew, correct, and he’s been here for a year,” he answered.

The more senior Concept Capital executive also claims (iMediaEthics did not see the email) that the New York Post error generated a personal apology from former congressman Weiner himself.

“I did get an email from Mr. Weiner apologizing for getting caught up in this,” he told iMediaEthics. “Thursday [Jan 10] by twelve o’clock, my email address is on the website and Anthony Weiner sent me an email apologizing for getting wrapped up in this…I’m paraphrasing but he said something like it baffles me every day.  I don’t know where they get this stuff, best of luck to you, Anthony Weiner.”

iMediaEthics asked if one of their enemies or rivals could have planted a hoax.  He answered, “But even then it would take the Post how many seconds to fact check it?  Thirty?  Twenty?”

“How is your Andrew Wiener about all this?” iMediaEthics wondered. That executive responded, “He was fine.  He couldn’t care less.”

We reached out to Andrew Wiener for verification.  The Observer and  NY Mag should have called Andrew himself. This is the third fact check fail.

“You are the first person I spoke to on the matter,” Wiener said.  “One, my name is not even spelt that way [Weiner]. There is clearly no relation of any sort. So I have no idea where they got the information they got.”

As to how he felt about his identity being briefly conflated with Anthony Weiner’s, Wiener answered, “I thought it was funny.”

New York Magazine reported in an update: “The Post has now taken down its Weiner story, with no correction or explanation for the mix-up.” The link to the Weiner story was “dead” the Observer noted. But iMediaEthics found a correction on page 14 of the Jan 11 print version of the New York Post. See below.

Unlike the page 3 story, the correction ran on page 14. (Credit: New York Post).

iMediaEthics asked the senior exec if Concept Capital had called the New York Post to ask for the correction.  “We never talked to the Post, ” he answered. His opinion was not to call “and tell them that they ran a story that’s a hundred percent false,  they’re not gonna care…We didn’t think it would get us anywhere. I was very surprised that the Post ran a retraction” followed by a correction.

We emailed the NY Observer and NY Magazine to inform them of the error. The NY Observer said it is posting a correction. Any updates will be posted here.

UPDATE: 5:05PM EST:   The NY Observer ran a correction today:  “Correction 1/17/12: Media watchdog site iMediaEthics alerted us to the fact that the actual surname of Concept Capital’s employee is actually Wiener, not Weiner as we reported based on The Daily Intel blog post. We regret the error.”