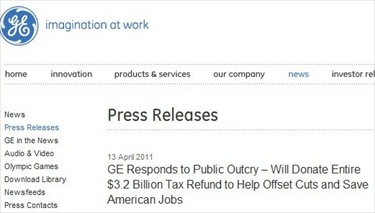 The Associated Press and other news organizations were duped by the above fake General Electric press release. (Credit: GE News centers, Screenshot)

The Associated Press and Dow Jones, among other news services, were duped this week by a hoax news story that General Electric was giving back the U.S. Treasury its $3.2 billion tax refund.

The Oregonian added that the AP’s story on the hoax release was “widely circulated” by Forbes, Yahoo News and an AP staffer’s Twitter account.

The fake press release was “official-looking” and carried the GE logo and slogan, according to Reuters.

AP has since retracted the story and its business editor, Hal Ritter, admitted to ABC News:

“The AP did not follow its own standards in this case for verifying the authenticity of a news release.”

ABC News reported that pranking group the Yes Men was involved in the hoax.  The Yes Men “supported” US Uncut, which was responsible for sending the press release.  Reuters explained that the Yes Men is “an activist group known for issuing hoax statements claiming major attitude changes in corporate America, ”

Yes Men spokesperson Michael Bonanno reportedly told ABC News that its announcements pose as being issued by public figures and corporations because it’s the only way to get coverage.

GE’s tax payments have been in the news this month as the New York Times reported that the company didn’t pay any federal taxes for 2010.

CBS News’ report suggested that calling the contact information listed in the press release, for a “Samuel Winnacker,” indicated the press release may be a hoax.  The two times CBS News called led to different voicemails — the first time for a voicemail of “Andrew” and the second time for a “computerized-sounding British woman’s voice.”

While CBS News reported hearing back from “Samuel Winnacker” later, he said  “an actual GE spokesman” named Andrew Williams did tell CBS News that the press release was “a hoax.”

According to Reuters, GE’s shares dropped following the hoax release’s being reported.  Christian Science Monitor noted that the stock price “began to recover after the AP retracted the story.”