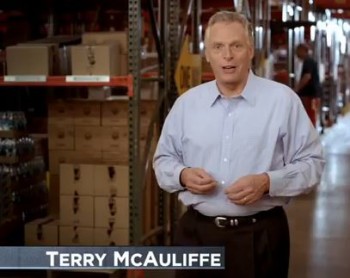 The Associated Press made a retraction last night after falsely claiming that Terry McAuliffe, who is running for governor of Virginia, lied to investigators about an insurance scam.

The AP story, by Bob Lewis, reported that McAuliffe “was accused in court documents of having lied to a federal investigator looking into a benefit scheme,” according to a statement on the AP’s website.  In the documents, someone identified as “T.M.” reportedly was accused of lying, but the T.M. isn’t McAuliffe.

Lewis “mistook” T.M. as McAuliffe, according to entertainment and media news site The Wrap. “Though he apparently has the same initials as McAuliffe, he is a completely different person,” The Wrap reported, noting that McAuliffe was listed as an “investor into what would later turn out to be an insurance scam that used the identities of terminally ill people to obtain death benefits from insurance companies.”

“The person referenced on page 68 is absolutely not Terry McAuliffe since he was a passive investor and did none of the things referenced: First, he was not interviewed by law enforcement on April 20, 2010; rather, he was in Richmond for a day of meetings. Second, he was never involved in the referral of any annuitants to Mr. Caramadre, ever.”

In its statement on the retraction, the AP quoted its media relations director Paul Colford as saying the bogus story was live for an hour and 38 minutes, and pointed to the AP’s new story about McAuliffe and the court documents.

That new story, published Oct. 10, reported that McAuliffe was “among scores of those who invested with a Rhode Island estate planner who profited from death benefits paid on policies issued on terminally ill people without their knowledge.”  It added that “there is no allegation of wrongdoing by McAuliffe,” and mentioned the AP’s earlier inaccurate reporting.

Bob Lewis, who wrote the story for the AP, admitted “the error was mine” in an Oct. 10 tweet.

The error was mine and I take responsibility for it. http://t.co/2tGpw7Ye0n

He also asked for any who shared his original report to “pass along the retraction.”

All who tweeted the errant story please pass along the retraction. http://t.co/hBhNmHytLH
— Bob Lewis (@APBobLewis) October 10, 2013

iMediaEthics has written to the McAuliffe campaign for further comment and will update with any response.