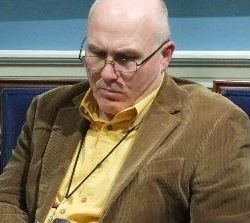 Bob Lewis, above, and Dena Potter were fired by the AP, the Huffington Post reports. (Credit: Twitter, screenshot)

The Associated Press fired its journalist Bob Lewis over his bogus story about Terry McAuliffe, according to the Huffington Post. Editor Dena Potter was also fired.

As iMediaEthics wrote earlier this month, Lewis wrongly reported that McAuliffe, the Democratic Party’s candidate for Virginia governor, “was accused in court documents of having lied to a federal investigator looking into a benefit scheme.” The documents did list McAuliffe as an investor in an insurance scam, but the person accused of lying was only identified as T.M.  The AP quickly retracted Lewis’ Oct. 9 story and Lewis apologized via Twitter.

The Huffington Post’s Michael Calderone reported Oct. 21 that, based on anonymous sources, “Lewis has since been fired” as was an AP news editor, Dena Potter. Potter’s Twitter account identifies her as “news editor for Virginia and West Virginia.” Calderone reported that neither the AP nor the journalists responded with comments about the reported firing.

Blindsided. AP’s loss is someone else’s gain. If you’re looking for a seasoned political reporter, snap up @APBobLewis while you can!

. @apboblewis and @denapotter have always been fair, tough and smart. Virginians deserve dedicated reporters like them.

McAuliffe’s campaign issued an Oct. 21 statement on its website in response to the news of Lewis’ and Potter’s firing.  That statement reads:

“We’ve consistently said this story is water under the bridge and did not ask for any actions to be taken against those involved,” said McAuliffe Communications Director Brennan Bilberry. “We have had a professional relationship with Bob Lewis, Dena Potter and the rest of AP’s Virginia team during this campaign.”

Politico reported a few days ago that Lewis was suspended:

“Lewis, a highly respected veteran on the Richmond political scene, will no longer cover the race between McAuliffe and Ken Cuccinelli, and may be suspended through the election. His last story on the race was published Oct. 14.”

iMediaEthics wrote to the AP asking about Politico’s report of suspension. We’ll update with any response.
Hat Tip: Michael Calderone