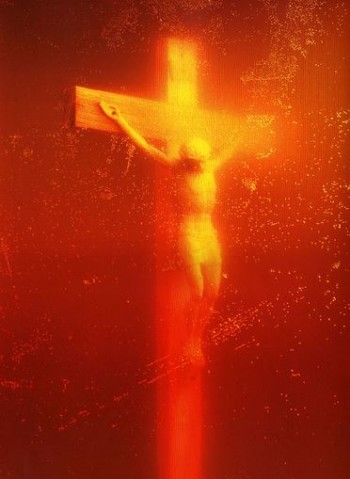 The Associated Press unpublished a 1989 photograph “Piss Christ” from its site after the Washington Examiner claimed it was unfair that the AP would publish an image that some Christians find offensive despite refusing to publish Muhammad cartoons from satirical website Charlie Hebdo, Slate reported.

The 1987 photo by Andres Serrano is “a photograph of a crucifix in a vat of the photographer’s urine,” the Examiner reported.  A photo of Serrano’s work was published in 1989 by the AP. In 2011, the Guardian described the image as “surely the visual manifesto and original prototype of the use of shock in contemporary art.”

As iMediaEthics has written, several news outlets announced they wouldn’t be showing cartoons from Charlie Hebdo in reporting on the Jan. 7 attack. The AP said it wouldn’t use the photos because they were too provocative. AP spokesperson Paul Colford told BuzzFeed, “None of the images distributed by AP showed cartoons of the Prophet Muhammad. It’s been our policy for years that we refrain from moving deliberately provocative images.”

Interestingly, the “Piss Christ” photo was also brought up in an article responding to the attacks at Charlie Hebdo‘s offices.  In an opinion blog Jan. 7, “The Blasphemy We Need,” New York Times‘ Ross Douthat referred to “Piss Christ” and criticism of similar works. “Liberty requires accepting the freedom to offend, yes, but it also allows people, institutions and communities to both call for and exercise restraint,” Douthat wrote.

According to the Washington Examiner, the AP yanked the photo “around the time” the critical Examiner post was published.

iMediaEthics searched AP Images’ website for “piss of Christ” and “Andres Serrano” and received no results of the photo in question.

The Associated Press told Politico that “It’s been our policy for years that we refrain from moving deliberately provocative images. It is fair to say we have revised and reviewed our policies since 1989.”

iMediaEthics has written to the AP to ask what prompted the take down of the photo — if it was specifically the complaints in light of the Charlie Hebdo decision or the Examiner and other media reporting on its presence — and if it will be reviewing all photos for potential offense.  We’ve also reached out to Serrano for comment.