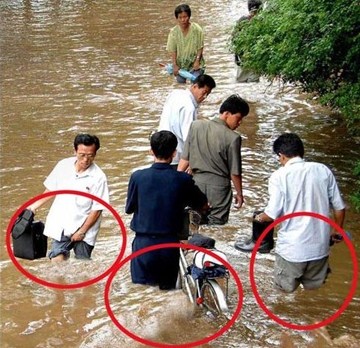 The AP has attached a "kill notice" to this photo, released first by a North Korean news agency. (Credit: Joongang Daily, screenshot)

The Associated Press has put a “kill notice” on an AP released photo that has turned out to be Photoshopped, Korean “public service agency” and “English broadcasting station” Arirang reported.

The doctored photo shows men wading in a “flood scene in North Korea’s capital Pyeongyang,” according to Arirang.

Daily South Korean newspaper Joongang Daily explained the Photoshop was detected because the men pictured in the “flooded street” have “relatively dry clothes.”

Unnamed “observers” have explained that the Photoshop may have been “to warm up support for more international aid,” Arirang reported.

The kill notice reads:  “The content of this image has been digitally altered and does not accurately reflect the scene.”

AP spokesperson Paul Colford reportedly told Radio Free Asia that the photo wasn’t supposed to be released by the AP.  “It did go on the wire by mistake,” Colford is quoted as saying.

According to Joongang Daily, the AP began working with the Korean news agency just last month.  See here the AP’s June 29 press release on the arrangement.

StinkyJournalism wrote to the Associated Press asking for comment and more information.  The AP’s director of media relations, Paul Colford, confirmed that the photo was put on “the AP wire because of human error” and that the “kill notice” was sent because the image was “digitally altered.”

StinkyJournalism has written to the Korean Central News Agency for more information and will update with any response.