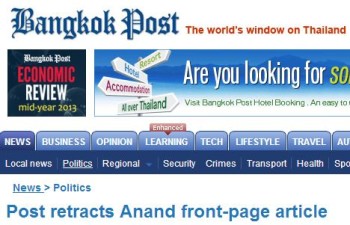 Something fishy happened over at the Bangkok Post last week.

The Thailand newspaper apparently published a fake story about the country’s former prime minister Anand Panyarachun, according to an August 7 retraction note.

According to the retraction, in a front-page story August 6, the newspaper had reported a quote and comments about Panyarachun.  The story, “Anand spurns advisory council,” claimed Panyarachun didn’t want to be involved in a political reform assembly. The article said in part:

“Former prime minister Anand Panyarachun has turned his back on the government’s proposed political reform assembly, saying he will not allow himself to be used as a political pawn.”

But, the Bangkok Post’s retraction confessed that Panyarachun said he hadn’t been interview by the newspaper.  The retraction said in part:

“The Bangkok Post would like to clarify that both the headline and statements attributed to former prime minister Anand Panyarachun in the article are erroneous and totally groundless.

“Mr Anand confirmed that he has never spoken to any Bangkok Post reporter about the matter.”

The article in question has since been unpublished, but iMediaEthics found it on website Press Display.

Three journalists are credited on the byline, and as English-language Asia-based news website  Asian Correspondent noted, one of the three — Nattaya Chetchotiros — is both president of the Thai Journalists Association and assistant news editor of Post Publishing, Bangkok.

Asian Correspondent suggested “three possibilities” for what went wrong with the article: a faked interview, an off-the-record interview that made it to print or a change of heart by Anand:

Check out below screenshots of the relevant sections from the article:

iMediaEthics has written to the Bangkok Post asking what exactly happened to prompt the retraction. We’ve also reached out to Chetchotiros through the Thai Journalists Association and will update with any responses.