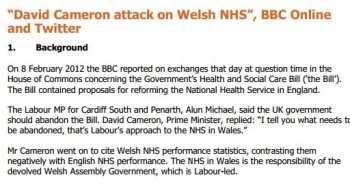 Even Twitter headlines can be subject to inaccurate complaints.

The BBC Trust’s Editorial Standards Committee ruled in an Oct. 30 report that the BBC was inaccurate with its February tweet “David Cameron attack on Welsh NHS,” which was an abbreviated version of the story’s headline “David Cameron attacks Labour’s handling of NHS Wales.”

At that stage, the complainant argued that:

“The headline was inaccurate because it suggested an attack on the NHS in Wales, whereas the object of the attack, as described in the full story, was the Labour Party’s handling of the NHS in Wales.”

The BBC Trust ruled against the BBC and in favor of the complainant that the “David Cameron attack on Welsh NHS” was inaccurate and “not sufficientialy precise” because it’s “a very different matter” than the full headline and story.

In its report, the Trust noted that the BBC has a “sub-editor” who produces “two versions of a headline, a longer one for the website (up to 55 characters) and a short one (maximum 33 characters) for the index on the website home page, which then fed through to Ceefax (being phased out), Twitter and elsewhere, and was designed to fit all of these other platforms.”

According to the ruling, the BBC Trust instructed that its

“Editorial Guidelines on accuracy apply to all content wherever and however it is received. It was particularly important for this to be borne in mind by the BBC as it continued in the development of new platforms for delivering its content.”

The Trust called for any versions of the inaccurate headline to “be removed or adjusted.”  The article in question now carries an “update” about the Trust’s ruling.  The update reads:

“Update 15 October 2012: The headline used when this story appeared on website indexes at the time of publication has been changed following a ruling by the BBC Trust.“

iMediaEthics wrote yesterday about the resignation of BBC director general George Entwistle after BBC’s Newsnight had to give an “unreserved apology” for its report that “led to Lord [Alistair] McAlpine being wrongly implicated in the alleged sexual abuse of children.”

The BBC has apologized a few times in the past several months including an August apology for saying (wrongly) that Olympic athlete Luke Campbell’s mother  and sister had died,  a September apology for a “breach of confidence” by reporting Queen Elizabeth’s comments, an October apology for accidentally airing the f-word.

iMediaEthics has written to the BBC asking if the Trust has handled complaints about the accuracy of Twitter headlines or headlines before and will update with any response.