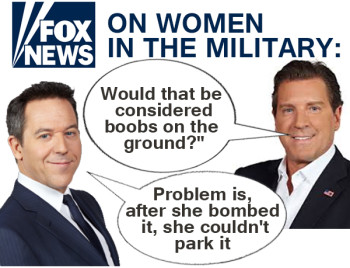 Fox News’ co-host Eric Bolling referred to a female pilot fighting against terrorist group ISIS as “boobs on the ground.” He has since twice apologized for his “inappropriate” joke.

The comment was made during a Sept. 24 segment for Fox News show The Five about Major Mariam al Mansouri, the United Arab Emirates’ first female pilot who dropped bombs in Syria.

“Remarkable, very excited, I wish it was an American pilot,” Bolling’s co-host Kimberly Guilfoyle said, when discussing al Mansouri. “I’ll take a woman doing this any day to them. I hope that hurt extra bad for you because in some Arab countries women can’t even drive.”

Greg Gutfield, another co-host of The Five, added “Problem is, after she bombed it, she couldn’t park it,” trying to joke about women being bad parkers, Mediaite reported.

Then, Bolling went over the top and made an even worse joke that continued to demean the female pilot just doing her job: “Would that be considered boobs on the ground,” said Bolling, trying to twist the “boots on the ground” phrase.

Bolling apologized on Sept. 25, suggesting he didn’t realize how terrible his “joke” was until he saw his wife. “I made a joke and when I got home, I got the look. I said sorry to my wife and I apologize to you all and want to make that very clear,” he said, Mediaite reported.

To his credit, Bolling went back on air the next day, Friday, to issue a more thorough apology in which he accepted responsibility for his poor taste.  In that Sept. 26 apology, Bolling specifically admitted he was disrespectful to the pilot.

“Earlier this week I made a comment that was wholly inappropriate and I apologize for it. The comment came during [Kimberly Guilfoyle’s segment] One More Thing’ honoring U.A.E. bomber pilot Major Mariam al Mansouri who bombed ISIS,” he said.

Bolling admitted, “My remark was not intended to be disparaging of her, but that’s how it was taken. I should have known better and used better judgment. Yesterday I made an apology on this show but it was inadequate. Fox News has received letters from viewers including from women in the military and I’ve taken them to heart.”

“Therefore let me speak clearly and sincerely. I’m sorry for what I said. I believe that Major al Mansouri is a hero. She’s courageous, brave and she deserves our praise not inappropriate jokes.

“I appreciate that she is fighting the extremists that threaten all of us. She has my admiration and my very very sincere gratitude.”

Gutfield also addressed his remarks, according to Fox News’ Gretawire blog. Gutfield didn’t apologize but admitted his comment was “hackey.” He said:

“I have heard that some people in Washington and elsewhere may have misinterpreted my joke about the amazing female fighter pilot from the United Arab Emirates asking if she could park the jet.

“People who watch this show and Red Eye, which is on late at night, know that I make hackey jokes knowing they are very hackey.

“That the joke represents a stereotypical mindset, in my mind, was the joke.

“However the UAE should know that I did not mean to slight their progressive move in having this great woman lead the war on terror, blowing up those heathens. She’s pretty awesome.

“And – of course women, in the UAE can drive. And that’s the real joke. They can drive – and I can’t.I don’t even have a drivers license. I can’t even park! It’s disgusting.

“By the way, Major Al Mansouri inspired me to go to the DMV. I’m actually going to the DMV next week because I’m a big chicken, I hate driving in New York.”