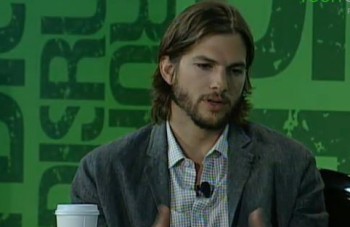 Ashton Kutcher is listed as a founder of A+ (Credit: Flickr, "Zennie Abraham")

A+ identifies itself as a ” platform that will leverage viral social storytelling to create positive change in the world.”

Further, the Daily Dot added, “The company never directly responded to our emails.”

As evidence, the Daily Dot provided a couple of examples of the A+ articles that were stolen from BuzzFeed and Huffington Post.

One example shows A+ lifted the entire article and images from BuzzFeed’s June 16 story, “After a Girl Was Sent Home in Tears Because Her Dress Was Too Short, Her Mom Wore It To Graduation.”

A+’s article was titled, “This Girl Was Sent Home In Tears Because Her Dress Was Too Short. So Her Mom Did The Most Awesome Thing Ever.” It didn’t have a timestamp or byline, according to a cache of the article iMediaEthics viewed. BuzzFeed is listed as the “source” for the article and some of the pictures.

Essentially, A+ copied and pasted the full text of the BuzzFeed article, slapped a different headline and ending on it, and turned the six paragraph story into a six-point list.

Below is the full text of the A+ article. iMediaEthics bolded content that is verbatim from BuzzFeed.

“1. Violet Burkhart was sent home from school on the last day of her senior year at Central Davidson High School in North Carolina. The school said her dress was too short.
2. Violet had worn the dress to school before without an issue. Amy Redwine, Violet’s mom, was outraged. So Amy decided to stand up for Violet and wore the dress to graduation.
3. “If I thought this dress was inappropriate, I would have never allowed her to wear the dress,” Redwine told local reporters. “I’m going to wear it in front of everybody and be proud just like she should have been able to on her last day.”
4. So Amy headed to graduation on Saturday, proudly wearing the dress Central Davidson High School thought was inappropriate.
5. Amy wasn’t mad about the dress code, only the way the school handled things. The school district has yet to comment on the controversy.
6. But Amy said her biggest concern wasn’t changing the school’s dress code — she just wanted to make sure Violet’s graduation was a special one.
If you love this story about Violet and her awesome mom as much as we do, be sure to share it with your friends. Click below now.”

A+ told Beta Beat it is investigating the accusations. ““We take these allegations seriously and are looking into them. The content that was removed was taken down as a precautionary measure. Respecting the intellectual property of others is extremely important to us.”

The Guardian noted that earlier this summer Kutcher was accused of stealing a photo. “This month, the photographer Marsel van Oosten took to Twitter to call out the star for stripping an image of his of its watermark and reposting it as his own,” The Guardian reported. Van Oosten tweeted about the accusations:

Ashton Kutcher stole my picture, re-processed it, removed my watermark, and then added his own. http://t.co/pDTghDhH8S #stopstealingmyimages

iMediaEthics has written to A+ for more information including who writes the articles for its website, what the review of the articles will include and how many articles were taken down.