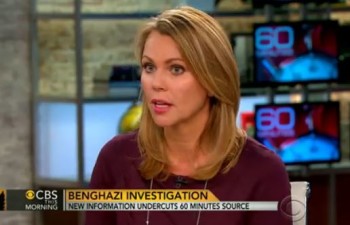 CBS News’s Lara Logan admitted that source Dylan Davies “misled” CBS’ 60 Minutes by giving wrong information about the 2012 attack in Benghazi. She said that 60 Minutes will also “apologize to our viewers” and air a correction Nov. 10, Logan said.

Logan made the admission and explained what went wrong in an interview this morning with CBS’ morning show This Morning. On Oct. 27, 60 Minutes had aired an interview with Davies, who was using the pseudonym Morgan Jones and told Logan his account of what he saw at Benghazi.  At the time of the attack, Davies “worked for the State Department in Libya, was the manager of the local guard force at the Benghazi Special Mission compound.”

Davies told 60 Minutes that he saw the attack.  “He described for us his actions the night of the attack, saying he had entered the compound and had a confrontation with one of the attackers, and that he had seen the body of Ambassador Chris Stevens in a local hospital,” Logan said. According to Logan, CBS had vetted Davies’ background and the information he provided.

A link to the 60 Minutes program in question now goes to an error page.

But, Davies’ account came into question after 60 Minutes aired the program. Davies’ incident report on that night said that he wasn’t at the compound, The Washington Post reported Oct. 31. The Daily Beast then got a copy of the incident report to publish on its website, but Davies told the Daily Beast the report wasn’t real. Nonetheless, 60 Minutes still stood by the report.

“He denied that report and said that he told the FBI the same story he told us,” CBS News’ Logan said.

CBS News then said, in a Nov. 7 statement, that it was “reviewing” Davies’ story:

“60 Minutes has learned of new information that undercuts the account told to us by Morgan Jones of his actions on the night of the attack on the Benghazi compound.

“We are currently looking into this serious matter to determine if he misled us, and if so, we will make a correction.”

Then, this morning, Logan apologized on behalf of 60 Minutes.

“He told the FBI a different story from what he told us,” Logan said.  “That’s when we realized that we no longer had confidence in our source, and that we were wrong to put him on air, and we apologize to our viewers.”

See below Logan’s interview with CBS This Morning about the report.

Davies recently published a book under his pseudonym titled The Embassy House: The Explosive Eyewitness Account of the Libyan Embassy Siege by the Soldier Who Was There.

However, Jeff Glor, who was one of the two This Morning hosts to interview Logan about the error, noted that CBS owns the publisher of Davies’ book.  60 Minutes “acknowledged it was a mistake not to disclose that the book was being published by Simon & Schuster, which is a CBS company,” he said, asking if Davies wanted money from 60 Minutes.  Logan said “he never asked us for money.”

The New York Times reported that a spokesperson for the publisher of Davies’ book plans to “review the book.”