Charlie Sheen Did NOT Say Rob Ford Should Resign, Calls out Satire Story 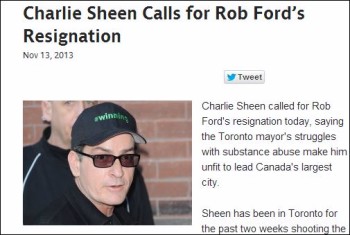 Actor Charlie Sheen took matters in his own hands to debunk a fake story about him and Toronto mayor Rob Ford.

Satire site The Daily Currant published a story Nov. 13 saying Sheen wanted Ford to resign. As iMediaEthics has written, Ford recently admitted to smoking crack and apologized after the Toronto Star published a video of him drunkenly talking about murdering someone.

“I hate to pass judgement on anybody, especially given my history. But I’ve been seeing those videos on the news, and I think it’s fair to say that Rob Ford parties too much. I can honestly tell you I’ve never been that high.”

The fake story went on to claim Sheen said Ford “needs help,” and “should at least resign.”

Sheen tweeted Nov. 14 a lengthy post on TwitLonger about the satire story. The post, addressed to Ford, reads in part (formatting original):

“the only truth or correct reporting in today’s
repulsive story regarding
my alleged comments about you,
is the accurate spelling of your great city.”

He apologized “for any grief this may have caused” and offered to “be of any assistance in any capacity in this media cesspool.”

The Daily Currant has tricked a few news sites this past year.

In February, The Washington Post reported that Sarah Palin planned to work for Al Jazeera, but that claim was based on a satire story  from the Daily Currant. The Daily Currant pointed out to IMediaEthics that not only did the Washington Post fall for the story, the newspaper also changed one of the quotes to clean up an intentional misspelling of Al-Jazeera as Al-JaJizzraa.

In April, Polish magazine Wprost reported on one of the Daily Currant‘s satire stories that claimed Sarah Palin called for President Barack Obama to invade the Czech Republic, as iMediaEthics wrote at the time. The story said that Palin thought the two suspects in the Boston Marathon bombings, Tamerlan and Dzhokhar Tsarnaev, were from the Czech Republic, and that a U.S. invasion would be a response to the marathon attacks.

And in May, the Drudge Report fell for a Daily Currant story saying that a Brooklyn restaurant “refused to serve” New York Mayor Mike Bloomberg a second slice of pizza.

Charlie Sheen Did NOT Say Rob Ford Should Resign, Calls out Satire Story