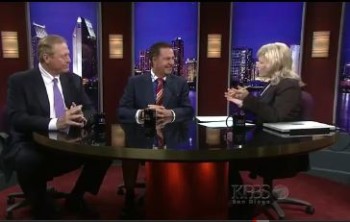 The owner and CEO of the San Diego Union-Tribune defended their call for the newspaper be a “cheerleader” for San Diego in a Dec. 15 interview with San Diego public broadcasting station KPBS, MediaBistro reported.

The “cheerleader journalism” plan was revealed in a Nov. 17 article by the Voice of San Diego.  In that article, the newspaper’s president and CEO, John Lynch, said the newspaper will become “pro-business” and “advocate for a new football stadium,” for example.  He is quoted as saying:  “It’s news information, but it’s also show biz.  You get people to tune in and read your site or the paper when there’s an ‘Oh wow’ in the paper.”   Lynch added “We’d like to be a cheerleader for all that’s good about San Diego.”

In the Dec. 15 interview with KPBS, re-published on MediaBistro’s website, the newspaper’s new owner, Douglas Manchester, defended cheerleader journalism, despite KPBS reporter Joanne Faryon’s argument that it “violates really one of the basic tenets of journalism in terms of being objective.”  Manchester claimed that “I think that you can report a story accurately and to the point but you can also report it on a positive basis as well and that’s my point. we’re certainly not here to restrict and or to be in a position where we try to control the news kind of thing but for so long in the city of San Diego, we have so many great things going for us, and I’d like to be in a position where we point  out what’s good and right about the finest city in America as opposed to some of the negativism that has permeated prior.”

The newspaper’s CEO John Lynch said he and Manchester will be “active” in the day-to-day of the newspaper, and the two said they wouldn’t restrict staff from reporting the news or providing both sides necessarily.

MediaBistro’s Fishbowl LA argued: “The obvious distinction these two should have made, even if it was only lip service, was that there is a difference between the paper’s editorial pages and its news pages. News is news, editorial is for cheerleading.”

In a Nov. 29 article, Online Journalism Review’s Robert Niles also questioned the cheerleader comments, noting that Manchester “is politically active” and has donated money to both Mitt Romney and Proposition 8.

While questioning if the Union-Tribune will be used “for advocating against government regulation and against anything, including unfavorable news stories, that could impede deals from getting done,” Niles argued that “A successful news publication in the 21st century must serve as a strong advocate for the community it covers.”

“The Voice of San Diego mission says they have an agenda to  “bring us together as a community” and to “spur solutions for the best of the community as a whole.” Our owners would agree wholeheartedly with those words. That doesn’t mean they are going to monkey with the news report in an unethical way; they have said repeatedly that they will not. You will see a different philosophy on the editorial pages, yes. But I think anyone who knows me or who has followed our newsroom would understand how we regard the suggestion that we would manipulate our report to coddle wrongdoers or to promote special interests.

“Now, I would also add that, in my opinion, the idea of building a better community is fundamental to our journalistic mission.  So, that value is not trapped on the editorial page; it infuses everything we do. People here will tell you that part of our focus since I got here has been to increase our ability to write about the achievement, intellect and creativity of our community. I intend to continue to pursue that and, yes, to emphasize it even more.”

We also asked: If the “cheerleader journalism” crosses over into news, how will the newspaper avoid biased reports?  He told us:

“A biased report, to me, is one that that is based on unexamined or undeclared assumptions, that fails to present different sides in their most favorable light, that is distorted in the depth or quality of its sourcing, that is manipulative in its language, its logic, its labels  or its imagery. Through the rigors of journalistic inquiry and intellectual honesty, every real journalist works constantly against the insidious and impossible problems of bias.

“This is a complex and challenging subject. But if you are asking whether our reporters will submit to some sort of directive or pressure or incentive to slant the news, the answer is a) no, that is not going to happen, and b) you obviously don’t know reporters very well.”