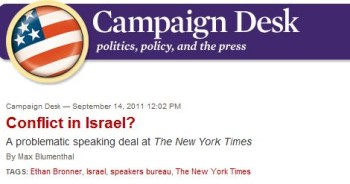 According to CJR, Bronner’s arrangement with Lone Star is:

“Lone Star arranges speaking dates for Bronner and takes 10 to 15 percent of his fee. At the same time, Lone Star pitches Bronner stories.”

According to CJR, the Times has approved his speaking deals and Bronner noted that he has a “minimal, non-exclusive and ‘not a very active'” arrangement with the company.

And CJR commented that the problem isn’t the speeches, but the fact that the agency “pitches him stories” and that Bronner has written about “a handful of the firm’s PR clients.”  Bronner denied that Lone Star’s involvement in a story pitch affects his decision to look into the idea. Read more here.

Epoch Times apologizes for another news outlet's article?
Why CBC says documentary on Trial co-produced by lawyer's daughter not conflict of interest