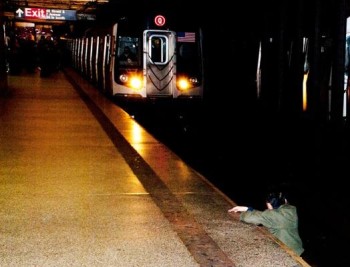 News media has been awash with debate over the front-page photograph by R. Umar Abbasi in today’s New York Post. Abbasi’s photograph is of a man, Ki-Suck Han, 38, of Elmhurst, Queens, only moments before he was hit and killed by a subway train. There are a number of clues in his pictures that the story Abbasi has told about the photograph is not truthful.

A lucky shot or a callous photojournalist?

Abbasi claims in the Post article that accompanied his photographs that “I just started running, running, hoping that the driver could see my flash.” But which way was he running?  When you examine the three published photographs in chronological order, it does not look as if Abbasi was getting closer to Kan.  It doesn’t look as if he was moving at all. In the photographs (left and center) that show Han sitting on the tracks, Han is quite close to the bottom of the frame but in the next picture (right) when Han is attempting to climb from the tracks, he is more or less in the same position relative to the camera.  The only difference is that the photographer appears to have stepped back away from the edge of the platform. The photographer doesn’t appear to have moved at all. He is not running but standing still taking pictures.

Also, look at the subway sign in the top left of each image.  The signs stay relatively the same size. Also note that for a guy frantically flashing his camera just “trying to save a life,” Abbasi manages to get pretty consistent shots, almost as if he was looking through the viewfinder.

There are several “rules” or guidelines when it comes to composing a good photograph. They are taught in every basic photography class.  These rules can be followed accidentally, but trained and experienced photographers intuitively balance and frame their shots into strong compositions or know how to throw out the rules to create a good shot. I do not know how classically trained Abbasi was but one can judge the rest of his work on its own merits. Despite Abbasi’s claim that he “just wanted to warn the train — to try and save a life,” his photographs are extremely well composed.

The rule of thirds:  To create a pleasing image, it is suggested that you divide the image into 9 equal parts using four lines and that the main subjects should fall on these lines or where they intersect. Admittedly the photograph is most likely cropped.

Lead lines: Lines are important in a photograph as they direct the eye where to look.  Strong photographs frequently have strong lines. In Abbasi’s photograph the lead lines start in the lower right and push you to look up to the left at the approaching train.  The foreground being dominated by the platform surface also helps to push your eye to the main subject of the photograph, the train.

Un-cropped version: A third purportedly un-cropped version the photo has become available. As you can see the rule of thirds applies to the train, the main subject of the image and Han is almost perfectly centered in the frame.  The lead lines created by edge of the platform start in the lower right third of the picture and push the eye diagonally to the upper left third where the train is entering the frame. Although the photograph is less balanced with so much negative space in the right third of the image, it arguably adheres to the rules of thirds much more so than the cropped version.

The NY Post writers used interesting language when describing how the images happened; “Abbasi, whose camera captured chilling shots of Suk’s tragic fight for his life” as if to imply that the camera through a will of its own preserved this event, presumably while Abbasi was trying to stop the train with his flash because he was too weak to help the man himself.

Should the New York Post have published these pictures at all?

There is an age-old adage in journalism that “if it bleeds it leads.” Blood and gore sell newspapers; so, for that matter, do fires. This has been going for a long time. Weegee, one of the most well-known photojournalists was mostly famous for pictures of his murder scenes. Graphic images of natural disasters are nothing new.

Editors have to struggle with what is appropriate to publish and what is not.  There is a loss of dignity that occurs when someone’s dead body is published for all to see.  Not to mention, the effect it has on the surviving family members is devastating. This photograph is different; in that Han is not yet dead in the photographs. They document the final terrifying seconds of his life. The moment of death is so intensely personal.

The front page headline is in some ways more disturbing than the photograph, DOOMED Pushed on the track, this man is about to die (the not so subtle subtext: “And we got a picture of it, woohoo!”).

This situation is reminiscent of the two young boys who were tragically swept away during the flooding caused by Hurricane Sandy.  A mother, Glenda Moore, was fleeing the storm when she was caught up in the rising water.  She pled for help from neighbors who allegedly turned her away.  The neighbors were universally decried as cold-hearted for not assisting the mother. The New York Post was none too sympathetic and described the situation this way:

“Cops said Moore banged on the doors of nearby houses, desperately seeking help. But the people who answered turned her away. She had to ride out the storm outside and got no help until hours later, when rescuers found her clinging to a post on a porch.”

If the neighbors had photographed this poor woman as her two boys floated away, would the New York Post have paid them and used those pictures on the front page?

UPDATE: 12/4/2012 9:05 PM EST: iMediaEthics asked the New York Post for comment earlier today and will update with any response.