CNN iReport Unpublishes Hoax, Asteroid won’t ‘end civilization as we know it’ in 2041 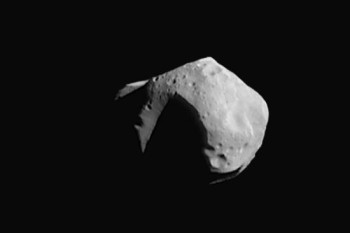 A 1997 photo of an asteroid (Credit: Wikipedia)

CNN unpublished an iReport story that claimed an asteroid was going to hit Earth on March 35, 2041.  The story was titled “Giant asteroid possibly on collision course with Earth.”

The story claimed of the civilization-ending asteroid: “Astronomers have placed the odds of an impact at 1 in 2.04, which is by far the most unprecedented risk ever faced to humanity, let alone from asteroids. Such an impact could potentially end civilization as we know it.”

The iReport has been replaced with a note explaining it was removed and a “producer note” about the story being fake.

“NASA has confirmed via email that this story is false. A spokeswoman for the Jet Propulsion Laboratory says that the largest object detected by NEOWISE measures 3 km in diameter and poses no risk to Earth. The iReport has been removed.”

iReport stories can be written by any user and aren’t vetted by CNN staff, despite being a CNN product. In 2012, CNN’s Matt Dornic described iReport as “essentially a social network for news,” and CNN only fact checks about one quarter of posts, as iMediaEthics wrote at the time.

The article had “more than 200,000 views” before it was removed, according to the Daily Caller.

It was published for between 22 and 24 hours, according to UPI and CNET.

The article had said in part: “Scientists at NASA’s Jet Propulsion Laboratory have detected a large object the size of Manhattan possibly on a collision course with Earth. Using their Near-Earth Object Wide-field Infrared Survey Explorer (NEOWISE), the 10-mile wide object was found approximately 51 million miles from Earth.”

IO9 published a screenshot of the original article.

The Inquisitr appears to have reported on the hoax story as if it were real, evidenced by an “update” note on its website. The update clarifies that the story of the asteroid is fake.

“UPDATE: In response to some comments that this is a false story: yes, of course it is, hence the editorial comment that we noticed the false date along with the rest of our story; but the original was not created by us and it was not played off as satire by CNN. While the network has since removed all traces of the iReport — even the retraction — here’s a screen grab from when we imported the original link into our Pocket account early this morning. Hope this clears things up!”

In May 2011, iReport featured a hoax story and fake photo saying that “Friday” singer Rebecca Black was pregnant.

In July 2012, iReport published a hoax story saying musician Gotye committed suicide. iMediaEthics spoke with CNN senior director of public relations Matt Dornic and CNN iReport “participation director” Lila King about the bogus, harmful story, both of whom explained that iReport is user-generated and not vetted by CNN. For more on CNN’s iReport and when CNN vets material on its website, read our 2012 report.

CNN didn’t have any further comment about the incident, when asked by iMediaEthics.

iMediaEthics has written to NASA to ask how this hoax has affected the agency.

CNN iReport Unpublishes Hoax, Asteroid won’t ‘end civilization as we know it’ in 2041