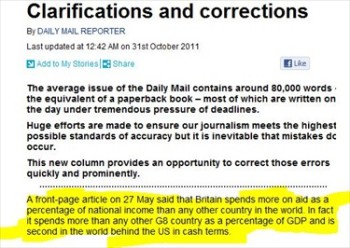 The Oct. 31 page two correction not only was made five months after the story originally ran (on May 27) but also changed the central point of the front-page story: that the “UK doles out more aid than any other country,” according to Tabloid Watch.

As Tabloid Watch explained, Full Fact questioned the story on the day of publication – May 27.  “While the UK is the most generous G8 economy in international aid relative to GNI, it does not give the most aid of any country in the world, neither relative to GNI or in absolute terms,” Full Fact explained.  Full Fact’s website explains that it’s ” an independent fact-checking organisation” in the UK.  It was created in April 2008 and became active in 2010, according to its website.

According to Tabloid Watch, Full Fact’s complaint produced the correction.  Further, Tabloid Watch noted that the print regulatory body the Press Complaints Commission received a complaint from Full Fact over the story and a July 11 story called “Britain’s broken schools.”  The PCC’s adjudication  notes that Full Fact called both stories “inaccurate and misleading.”

In an Oct. 31 blog post about the PCC adjudication, Full Fact criticized the Daily Mail’s response to Full Fact’s complaints, including the length of time it took for the Daily Mail to correct the material.

“We do not think the Daily Mail acted with good faith in its dealing with us through the PCC. So we asked the Commission to censure the Daily Mail for this foot-dragging and manoeuvring. Sadly the adjudication fails to mention the issue,” Full Fact wrote.

Full Fact also questioned why the PCC didn’t call on the Daily Mail to also apologize to readers.