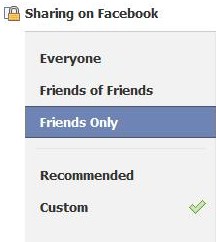 “Information on closed profiles are reserved to people — the Facebook ‘friends’ — who have been authorised to access the profile,” the Danish Press Council said in its ruling.  “That is why media do not in principle have access to use information posted in closed profiles.”

As the AFP noted, the ruling creates a “legal precedent on how media can use the Facebook social networking website.”  However, last April the press council ruled that information set as “public” can be reported. Facebook users can set profile information as “public” (available to everyone on Facebook) or “private” (where one has to be “friends” with the user to see; in order to be “friends,” both users must confirm the friendship.)

The ruling came after the newspaper Ekstra Bladet published comments in July made by the brother of Denmark’s prime minister on his own page.

The prime minister, Lars Loekke Rasmussen, is the centre-right political party leader.  His brother, Knud Loekke Rasmussen, commented on his own Facebook page labeling “members of the opposition ‘idiot’ and ‘loudmouth’,” the AFP reported.

Because four Ekstra Bladet journalists were Rasmussen’s Facebook friends, they could see his comments and reported them, the press council’s ruling explained.  The comments were published in an article headlined “Lars Løkkes bror hetzer S-top.” Ekstra Bladet is a Danish-language newspaper based in Copenhagen, according to Mondo Times.

See the press council’s ethics rules here. The eight-member council was created under the 1998 Media Liability Act and “handles complaints” against the mass media.  While the council can criticize and require a publication to publish the council’s criticism, it cannot fine or penalize the publication, its website explains.

See the ruling in Danish here and the Google Translate of it here.

iMediaEthics has written to the press council and will update with any response.