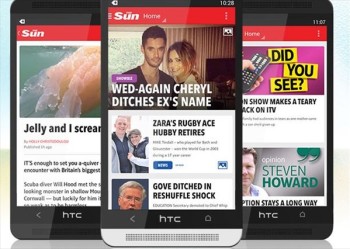 The Crown Prosecution Service announced two charges against the Sun's crime reporter. Above, promotional images from the Sun's website. (Credit: The Sun, screenshot)

A UK Sun reporter will be charged for “conspiracy to commit misconduct in public office.”

France is the crime reporter for the Sun. His hearing on the charges is August 21.

The CPS’s senior lawyer Gregor McGill noted in a statement on the CPS’ website that ” there is sufficient evidence for a realistic prospect of conviction and that a prosecution is in the public interest.”

“It is extremely important that there should be no reporting, commentary or sharing of information online which could in any way prejudice these proceedings,” the CPS’s McGill warned on the CPS’s website.

France was arrested back in January of last year as police investigated “information provided by News Corp’s Management and Standards Committee,” the Press Gazette reported.  He was the 22nd journalist arrested under Operation Elveden, which investigates “corrupt payments,” the Guardian and BBC report

As of June of this year, 14 public officials have been convicted for “taking or seeing payments,” according to the BBC.

iMediaEthics has reached out to the Sun for comment.

Andy Coulson, the former News of the World editor and former communications chief for Prime Minister David Cameron, faces a re-trial for “conspiracy to commit misconduct in public office,” as iMediaEthics has written. He also is charged with three counts of perjury and was convicted this year of phone hacking.