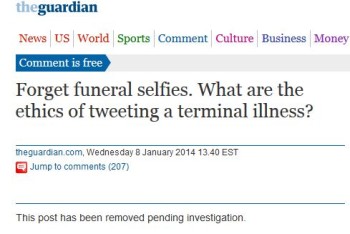 The Jan. 8 post has been replaced with a brief note from The Guardian that explains: “This post has been deleted with the agreement of the subject because it is inconsistent with the Guardian editorial code.” iMediaEthics wrote to The Guardian asking for a fuller explanation. A Guardian spokesperson told us by e-mail:

“Following an investigation by the Guardian‘s independent readers’ editor, we have removed the article in question from our website because it is inconsistent with the Guardian editorial code. This decision was taken with the agreement of Lisa Adams.”

“Forget funeral selfies. What are the ethics of tweeting a terminal illness? Lisa Adams is dying of breast cancer. She has tweeted over 100,000 times about her journey. Is this educational or too much?”

Keller’s post asked “Is there such a thing as TMI?”   The post read in part, according to Gawker which published an excerpt last week:

“Should there be boundaries in this kind of experience? Is there such a thing as TMI? Are her tweets a grim equivalent of deathbed selfies, one step further than funeral selfies? Why am I so obsessed? …”

.@emmagkeller many inaccuracies. I’m quite perplexed and concerned. Misses everything I’m trying to do. Stunned. Saddened.

A follower, @AmazzoneFuriosa, asked Adams of Keller, “didn’t she contact you before writing the article,” to which Adams said no.

Before the post was unpublished, Keller posted an update confessing that she cited her private e-mails with Adams in her post. The update said she failed to let Adams know “about the article and should have told her that I planned to quote from our conversations,” The Nation‘s Greg Mitchell noted. That update read:

“Since this article was published two days ago, there’s been a lot of negative comment on Twitter and below the line. Lisa Adams herself was upset by it. I had been in communication with her a number of times in recent weeks; given her health, I could have given her advance warning about the article and should have told her that I planned to quote from our conversations. I regret not doing so.”

iMediaEthics has asked the readers representative at the Guardian for more information concerning the investigation into Keller’s post.

In a follow-up post, Gawker pointed out that Keller’s husband also wrote about Adams.  Keller’s husband is former New York Times executive editor Bill Keller.  In a Jan. 12 column for the Times, he wrote:

“LISA BONCHEK ADAMS has spent the last seven years in a fierce and very public cage fight with death….

“Lisa Adams is still alive, still blogging, and insists she is not dying, but the blog has become less about prolonging her survival and more about managing her excruciating pain. Her poetry has become darker.”

The Nation‘s Mitchell summarized Bill Keller’s post as saying: “B. Keller, not quite overtly but certainly between the lines, suggests that Lisa Adams just die, already.”

Mitchell collected a handful of negative responses to Bill Keller’s article including some by Adams. Adams re-tweeted a few tweeters’ negative comments about Keller’s column and called him out on a facual error.

If anyone even looked at my bio they would know I have three kids. Nice way to do research.
— Lisa Bonchek Adams (@AdamsLisa) January 13, 2014

The New York Times has since published a correction that reads:

“An earlier version of this column misstated the number of Lisa Adams’s children. It is three, not two.”

She then tweeted about Keller’s comments

I don’t know why I, a person dedicated to education and personal choice by cancer patients, have been so mischaracterized as lay in hospital

I am all about acceptance of diagnosis and open honest communication, especially with kids. As if they never read a word.

I mean, he even tries to get people riled up that I went to pet the therapy dogs?
— Lisa Bonchek Adams (@AdamsLisa) January 13, 2014

I bet cancer isn’t even the main thing I tweet about over the years. I am mostly conversational, interactive, chatty.

it’s not fair as big reason I’m trying to do this is to leave legacy of education and sharing good work ppl like @sloan_kettering do.

hope comments and letters to editor by those who truly understand and READ what I write might help. Sad for my family and this tarnish.
— Lisa Bonchek Adams (@AdamsLisa) January 13, 2014