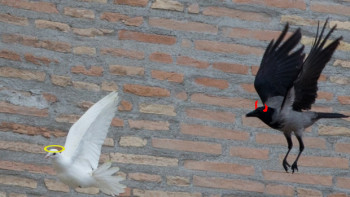 News coverage lately has risen well past the level of absurdity. Gawker is reporting that “science” has found a “horrible scary” new species of “dolphin that will kill us all.”  Countless news outlets wrote about a ghost ship full of cannibal rats set to invade England. And The Blaze, among others, is saying that in Indiana there is a report of “a real life demon possession” that is not easy to dismiss as untrue.

The “end of days” theme hopefully reached its zenith this past weekend with a widely covered bird story about doves of peace being attacked by other birds after they were released by Pope Francis. Coverage of the event clearly demonstrates yet another out of control sensationalism and complete disregard for fact checking and accurate reporting that is coming to dominate click bait digital journalism.

What does immediate mean? And where’s the video?

Early last Sunday, January 26, reports began to trickle out that something had gone wrong in Vatican City. Pope Francis with two children released a pair doves as a symbol peace and the doves were attacked by a seagull and a crow. The symbolism of this event was wasted on no one.

But the symbolism was apparently not enough. Many news outlets took the liberty of amping up the facts with fabrications.

The scene painted by the media is that milliseconds after the birds were released carnage ensued. The BBC reported the birds were mauled “as soon as they left the Pope’s care”. The Daily Mail said, “No sooner had the birds been set free” that “two larger birds swooped on the defenceless [sic] doves”

And Mediaite (among many others) reported that “the doves were immediately attacked by other birds”. Immediately is generally understood to mean without any intervening time or space. We have written the Vatican to determine the timing of the attack and if the Pope was aware of the attack befre the media coverage.

iMediaEthics has discovered one video of part of the “attack” distributed by CTV, the Vatican Television Center. It seems odd that despite the claims that “tens of thousands of people watched” only this one official video has surfaced. The Washington Post claims to have a video of the bird attack saying, “Here’s a video of the rumble.”  The video however is just a slide show backed by sounds of a crowd.

The CTV video makes clear that quite a bit of time passes between the bird release and the attack. The birds are released. Then the pope and children hug and wave and leave the window.

The CTV video itself challenges assertions made by Reuters and USA Today.

Not letting facts get in the way of a good story, Doug Stanglin for USA Today reported on Monday January 27, a much expanded narrative of the events that took place the day before.

“The boy looked upset at the bird’s misfortune, prompting the pope to embrace him and pat his head. The young girl appeared to be laughing at the unexpected turn of events.”

Reuters also told a similar story in their video broadcast.

“The attack on the dove didn’t faze the pope. He simply embraced the boy and patted his head as the girl laughed.”

While Reuters has the pope unfazed by the attack, Tom Lop of NewFiction.com has him “horrified”.

These narratives are all pure fantasy. The first video shows clearly that the pope and children had already left the window when the attack began. The AP, the source that USA Today used, described the timing of events accurately, describing it as happening “after the pope and the two children left the windows”.

The false version of events has been repeated by numerous websites, one site critically said the “girl appeared to be cynically laughing”. But reality is both children were happy and smiling and the bird attack had not yet occurred. The pope, two children and two other adults are the only people visible near the window. There is no apparent group of children. (Credit Screen capture)

The Washington Post reported in their version of what happened that “Pope Francis, a man of God, on Sunday nudged a boy and girl to release two white doves into St. Peter’s Square.” Again, let’s got to the video tape! In the Telegraph’s video the pope does not “nudge” the children but gives them audible command. The Telegraph also reports that the boy is distressed.

Thr Washington Post describes the crowd as being “gasping onlookers.” The Daily Mail said the birds escaped “to the relief of tens of thousands of onlookers”. But an examination of these video stills of the CTV video demonstrates the ridiculousness of these blow by blow narratives. It is clear that with the scale of St Peter’s Square, the size of the building and the comparative size of the bird that very few people were aware of what was happening with the birds. Hence, why no other videos. Four video stills that show just how far away the birds were from the crowds and how difficult it would be to see them. If the crowd couldn’t see the birds how could they be gasping?

Seagulls and Crows, Not Birds of Prey

The article in the Washington Post describes the seagull and crow as “birds of prey” and “predators”, a sentiment repeated by many other outlets, like the AP. iMediaEthics was surprised by this description of a seagull and crow and sought clarification from the ornithologists, the scientists who study birds and their behavior.

iMediaEthics corresponded with Pat Leonard, media relations for the Cornell Lab of Ornithology who passed our questions along to one of their ornithologists.  Leonard told iMediaEthics that “gulls and crows are scavengers always on the lookout for a meal.”

When asked if they were considered predators or birds of prey it was a qualified maybe but not typically.

“They are predators in the sense that they will try to eat anything they can subdue—but they don’t have the big talons of a typical bird of prey, such as an owl or a hawk, that they can use to snatch their intended meal.”

Did the birds survive?

The fate of the birds seems to also be up for some debate and imagination. The reports run the gamut from the Daily Mail’s “seemingly uninjured” to the LA Times’ possibly dead. Here is a visual breakdown of how the news media think the doves faired: The BBC even reported that there were “avian tweets of anguish” but iMediaEthics has found no audio that confirms this claim. (We have written to BBC to ask for their source. )

Gawker exaggerated again, adding some gore by reporting that with “blood dripping from its beak, the seagull repeatedly went after one dove”.

iMediaEthics assumes that Gawker is referring to the red spot seen on the seagull’s beak. A little research would have revealed to Gawker that this is not blood and that “adults of many species of large gulls have a reddish or orangish gonydeal spot” on their beaks. Close up on the left of seagull involved in Vatican “attack.” Another seagull on the right that has the same mark on its beak.Photo composite. (Credit: AP and FreeFoto)

What was the Pope doing releasing Doves?

At what event was the Pope giving a speech? That is a very good question. It was either 1)  the Vatican’s annual Caravan of Peace or 2) the weekly Angelus Prayer.

The Holy See was delivering the Angelus prayer as he does almost every Sunday. At the conclusion of the Angelus Prayer, Pope Francis appealed for peace in the Ukraine where many have died in the latest violence and also admonished the murderers of a 3 year old boy in what has been described as a mafia hit. But these important messages were largely not mentioned or only added as an aside.

The LA Times only mention it in passing and glibly stated that the event was:

“a Groundhog Day-type omen, I have to say that when it comes to prospects for peace in Ukraine, expect six more weeks of well, not winter perhaps but, uh, darkness?”

One notable exception to this was an opinion piece on Bloomberg.com that focused on the turmoil in the Ukraine and only briefly mentioned birds.

It is amazing how such a non-event takes off with major media fueling it every step of the way, the truth be damned.

The Pope has had a tough month in the news. Fake quotes and Satanic cults (ie teenagers) stole a relic.