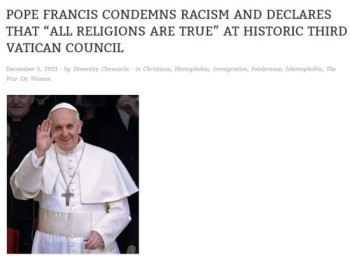 Pope Francis did not say that the Roman Catholic Church “no longer believes in a literal hell where people suffer.” He also didn’t say Adam and Eve were a “fable” and that hell was a “literary device” and “metaphor.”

But, those, and other, fake quotes were attributed to the Pope, and at least two news outlets– the Times-Union in Albany, N.Y., and the Times of Malta — published the quotes.

What is Diversity Chronicle?

Diversity Chronicle’s Dec 5 story was titled “Pope Francis condemns racism and declares that ‘all religions are true’ at historic third Vatican Council.”  The story claimed that the Third Vatican Council just “concluded” and Pope Francis made several comments that, if true, would have been extreme to have come from the Pope.

Another huge tip-off the story was bogus: there has been no Third Vatican Council.

Some of the phony comments attributed to the Pope include (emphasis added by iMediaEthics):

“The church no longer believes in a literal hell where people suffer. This doctrine is incompatible with the infinite love of God. God is not a judge but a friend and a lover of humanity. God seeks not to condemn but only to embrace.

“Like the fable of Adam and Eve, we see hell as a literary device. Hell is merely a metaphor for the isolated soul, which like all souls ultimately will be united in love with God.”

“All religions are true, because they are true in the hearts of all those who believe in them. What other kind of truth is there? In the past, the church has been harsh on those it deemed morally wrong or sinful. Today, we no longer judge. Like a loving father, we never condemn our children. Our church is big enough for heterosexuals and homosexuals, for the pro-life and the pro-choice! For conservatives and liberals, even communists are welcome and have joined us. We all love and worship the same God.”

“In accordance with our new understanding, we will begin to ordain women as cardinals, bishops and priests. In the future, it is my hope that we will have a woman pope one day. “

Diversity Council’s About page doesn’t disclose the site is satire. Instead it says, “Diversity Chronicle is a news web site focusing on news events relating to diversity of all kinds.” However, a disclaimer on the site states in bold “The original content on this blog is largely satirical.”

Further, the Diversity Chronicle’s “Progressive Editorial and Ideological Guidelines,” posted on the site last summer with a call for writers, says African Americans can “use the N-word under any circumstances” but white people can’t.  The guidelines go on to advise (satirically) how to report on rape, immigration, gender, economics and  crime. For example:

“Any time a man ever asks a woman for sexual relations, including if he is her husband, he is engaged in rape, even if she gives her expressed verbal consent. Since men enjoy superior power and privileges in our society, any sexual activity initiated by a male under any circumstances constitutes rape.”

“When humans eat meat they are murderous blood thirsty savages, when animals eat meat they following their instincts. When native and aboriginal tribes hunt animals and eat them, they are uneducated, when whites do so they are evil. It is morally acceptable for native and aboriginal tribes to wear animal skins or fur however it is criminal for whites. This is known as Animal Doublethink.”

The Times-Union‘s Ken Screven blogged Jan. 2 about the Pope’s comments as if they were real, but later updated his post to admit the Pope Francis quotes were fake.  The Times Union is a daily newspaper in Albany with a circulation of about 66,000 copies, according to Mondo Times.

Despite the fabricated comments, Screven stood by his opinions about the remarks.  He wrote:

“Please be aware that some of my eagle-eyed blog readers have discovered that some of the provocative comments featured below which were attributed to Pope Francis, were in fact fabricated in a satirical article posted on a website ‘Diversity Chronicles’.  Pope Francis did not utter some of the statements. My personal recollections are accurate. My apologies. It’s an example that just because it’s on the internet  does not necessarily mean it’s true and factual.”

Maltese newspaper The Times of Malta published a letter from reader Karl Consiglio that also used the fake quotes.

iMediaEthics has written to the Vatican press office for further comment and will update with any response.