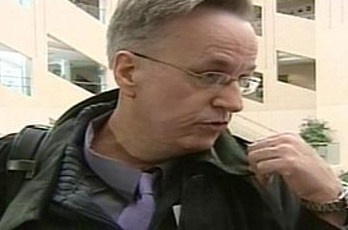 Nathan Black, pictured above in an interview with CTV this summer, posed as a reporter. He denies writing the blog Darren's Big Scoop. (Credit: CTV Edmonton)

A Canadian activist pretending to be a reporter has apologized for misrepresenting himself and confusing politicians he interviewed. But, he still says he didn’t write a blog attributed to his pseudonym, Darrensbigscoop.

The Seattle Times and Edmonton’s mayor are “considering legal action over the blog,” Canadian TV station, CTV Edmonton reported Oct 17. Darren’s Big Scoop blog has been deleted as of Oct. 20.

Holmes’ Oct. 7 blog revealed an “investigation into Edmonton’s municipal election, the airport redevelopment and the juicy political machinations at the heart of it,” The Journal reported. “It also claimed Mayor Stephen Mandel voted to close the airport to aid his friends in the land development industry,”The Edmonton Journal wrote. Mandel just won his third term as Edmonton mayor Oct. 19.

Sources interviewed by the phony reporter complained about the conduct of the interview.  Sid Hanson, one of the interviewees, is quoted as telling the Edmonton Journal the interview “was so bizarre and abusive he hung up.”  Hanson is an organizer for Yes! for Edmonton.

Nathan Black, a volunteer on the mayoral campaign of Mandel’s challenger David Dorward, has apologized for the controversy surrounding what he called a prank.  In an Oct 16 article the Edmonton Journal identified the fake journalist as Black, who was also “manager of the Envision Edmonton petition drive this summer to force a plebiscite on the airport issue.”

Black explained that he made the phone calls as a prank because he cares about the airport issue.  He also confirmed with the Edmonton Times that he did register that phone number and did interview Sohi and Sanson – but clarified that he presented himself as a Seattle Hill Times reporter (the Seattle Hill Times doesn’t exist).

“It was a prank. It got out of control,” Black is quoted as saying.

However, he says he didn’t write the blog, which the Edmonton Journal called “potentially libellous.”  He did tell “so many people, in detail” about the interview though.  “I did it because what I was hearing about Yes (for) Edmonton just didn’t seem correct or believable. I’m passionate about the airport.”

The Edmonton Journal dug around trying to find out who this reporter is.  As explained in its Oct 13 article on the fake reporter, The Journal wrote that  “There are no bylines for Darren Holmes or any spelling of Darren Forester at the Seattle Times or anywhere else.”

The Seattle Times’ assistant managing editor Jim Simon said “We don’t want this person presenting himself as a Times reporter or even using our name.”

In an Oct 18 article, the Edmonton Journal reported that  Black “might leave the pro-airport lobby group because of the controversy.”

“Envision Edmonton dismissed his actions as a runaway prank this weekend. However, mayoral candidate David Dorward has said Black is no longer welcome as a volunteer with his campaign,” the Journal reported.