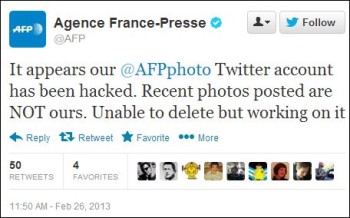 In a press release published by Editor & Publisher, the AFP announced the hack and warned its followers about any questionable tweets. The press release reads in part:

“Any documents or images posted on this account after 17:45 are NOT from AFP. AFP is taking all possible measures to restore the normal functioning of the account as soon as possible.”

The AFP added in a news story that “the Syrian Electronic Army claimed responsibility for hacking the AFP account.” That is the same group that admitted to hacking Al Jazeera’s “mobile service” in September.

According to the AFP, the hackers posted “images…related to the conflict in Syria.” One of those tweets was captured by The Next Web. Check it out below. iMediaEthics has written to the AFP seeking confirmation that the tweet pictured below was in fact posted to its account and by the hackers. We’ll update with any news.

The Next Web posted this image of a tweet it said the hackers posted. (Credit: Twitter/Next Web)

The AFP’s Twitter account for “news – and the stories behind the news” appeared to be unaffected. It did tweet about the hack, noting that “recent photos posted are NOT ours. Unable to delete but working on it.”

The AFP added that for the past two days it has “been the victim…of a so-called ‘phishing’ attack designed to steal the identifications and passwords of agency employees by luring them into logging on to a fake AFP website.”

iMediaEthics has written to the AFP asking:

“Director of AFP’s North America operations” David Millikin told iMediaEthics that the @AFPPhoto account “was suspended by Twitter at our request and will come back on line once we’ve been able to access the account management tools and securely change the password.” He directed the rest of our questions to North America editor-in-chief Chris Lefkow. We’ll update with any response.

UPDATE: 2/27/2013 9:45 PM EST: Lefkow told iMediaEthics that the hackers, who were “apparently .. the so-called ‘Syrian Electronic Army,'” posted “about six orseven” tweets to the @AFPPhoto account.  He also confirmed that the tweet pictured above, from The Next Web, was posted by the hackers on its @AFPPhoto account.