Fareed Zakaria Apologizes for 'Close Similarities' in Article, Suspended by 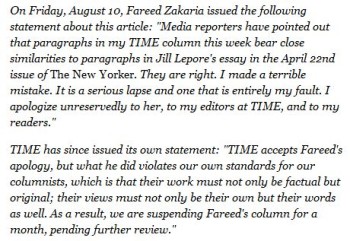 Fareed Zakaria apologized for “close similarities” in part of his column for Time magazine and a blog post on CNN to an April New Yorker report.

Zakaaria is an editor-at-large at Time and a CNN host, according to the Wall Street Journal.   He was suspended “pending further review,” from Time and CNN, the Associated Press and Politico reported.  A CNN spokesperson told iMediaEthics that his suspension is “undetermined,” while Time’s suspension is currently for a month.

Zakaria apologized saying he “made a terrible mistake” and a “serious lapse.”

Zakaria’s Time article now carries a note including Zakaria’s apology and Time‘s statement on the plagiarism, which reads:

CNN suspended him because his “shorter blog post on CNN.com on the same issue” had “similar unattributed excerpts,” Politico reported a CNN spokesperson said.  CNN unpublished that blog post, but the Atlantic Wire posted a portion of it from Google cache.

The Guardian described the plagiarism as “largely…descriptions of historical events and context about gun control.”  NPR added “The two excerpts posted on the site were dramatically similar, though Zakaria does change a phrasing here and there.”  Media Bistro’s TV Newser posted a side-by-side comparison of some of the text in question as did the Atlantic Wire.

According to the New York Times, Newbusters “spotted” the plagiarism.

We have written to CNN and the New Yorker for comments and will update with any response.

Last month, the New Yorker’s Jonah Lehrer resigned after admitting to making up Bob Dylan quotes.  Also last month, NPR unpublished a report by an intern who plagiarized.  In June the Wall Street Journal fired an intern for making up quotes and sources, as Connecticut newspaper the New Canaan News fired an award-winning reporter.

“We have reviewed Fareed Zakaria’s TIME column, for which he has apologized. He wrote a shorter blog post on CNN.com on the same issue which included similar unattributed excerpts. That blog post has been removed and CNN has suspended Fareed Zakaria while this matter is under review.”