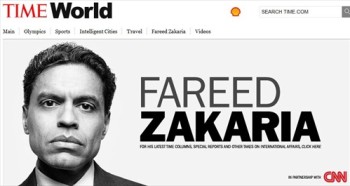 CNN and Time magazine announced the ends of Fareed Zakaria’s suspension after he apologized earlier this month for “close similarities” in his Time column to a New Yorker article, the Associated Press reported.

Time called Zakaria’s plagiarism an “unintentional error” and an “isolated incident,” adding that

“We have completed a thorough review of each of Fareed Zakaria’s columns for Time, and we are entirely satisfied that the language in question in his recent column was an unintentional error and an isolated incident for which he has apologized…We look forward to having Fareed’s thoughtful and important voice back in the magazine with his next column in the issue that comes out on Sept. 7.”

CNN said its review “found nothing that merited continuing the suspension” and that Zakaria will be back on air August 26.

Interestingly, while the Washington Post revealed in an August 13 report Zakaria’s column for the newspaper “will not appear this month,” the Post’s report on his suspensions ending chalked it up to vacation, writing that his “column has been on vacation this month and is scheduled to resume in September.”

As we have written, days after Zakaria’s apology, the Washington Post reported accusations by Clyde V. Prestowitz that in his 2008 book The Post-American World Zakaria failed to attribute a quote to Prestowitz’s book.  Prestowitz quickly apologized for his accusations and sent iMediaEthics a statement about his “error” as Zakaria did in fact credit him for the quote.  The Washington Post corrected its article and said that it “should not have published the article.”

UPDATE: 8/21/2012 1:10 PM EST: Zakaria “resigned from the Yale Corporation” August 21, saying that ” The work of the Yale Corporation needs and deserves such attention, but I simply do not have the capacity to do it and keep up with my main professional obligations.”