Father of Teen May Sue, Accused by NY Post as Boston Marathon Bomber on Fro 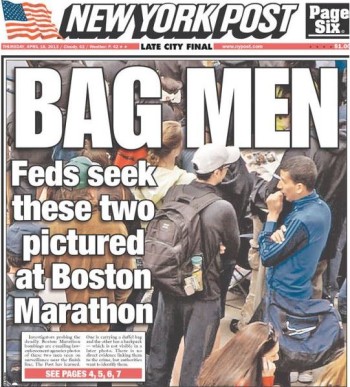 The New York Post might get sued over the above cover photo, the Washington Post reports. The two pictured weren't the suspects the FBI identified in the bombings at the Boston Marathon, but the Post hasn't apologized. (Credit: NYPost, via HuffPo, screenshot)

An angry father of a teenager wrongly identified by the New York Post as a possible suspect in the Boston Marathon bombings might sue, the Washington Post reported.  His son and another person were depicted in a front-page photo from the marathon that the New York Post said were being looked for by the “feds.”

The image, headlined “Bag Men,” suggested the two young men were the suspected bombers but, as the world found out hours later, the FBI had identified two other people — known now to be the brothers Tamerlan and Dzhokhar Tsarnaev — as suspects in the bombings.

El Houssein Barhoum, the father of the teenager in the bright blue jacket shown above, told the Washington Post’s Erik Wemple that he is “working toward a contract with a lawyer,”

Barhoum said the Post “should apologize on the newspaper” to his son, Salah Barhoum, who hasn’t been sleeping and has been missing school because of the attention the Post directed his way.

As iMediaEthics has written, News Corp’s Rupert Murdoch, who owns the New York Post, seemed to have defended publishing the photo by tweeting that “All NYPost pics were those distributed by FBI.” And, the New York Post’s editor Col Allan defended the photo, saying “we stand by our story” and that the New York Post didn’t “identify them as suspects.”

But, as the Washington Post’s Wemple argued at the time, even if the New York Post didn’t explicitly identify the two teenagers as suspects, they might as well have for suggesting the image was “the key photo.”

Check out all of iMediaEthics’ reports on the Boston Marathon bombings.