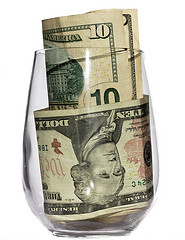 Freelance wine writer John Glas “asked the 10 finalists for best wine bar to provide him with free food and wine for evaluation so he could consider them for the top 5 list,” Dean reported. Calling it a “shakedown,” MinnPost.com blogger, David Brauer, quoted Glas’ “letter to restaurateurs” (emphasis original): “Due to the zero budget I am working with, the 4 courses and 4 wines will have to be complementary, but if you win or are a top five the free advertising is priceless.”

City Pages’ managing editor Matt Smith said via e-mail to Dean that he didn’t know about Glas’s request until some of the wine-bar owners complained about it to someone else at the newspaper, Dean explained.

However, Glas “had already evaluated several wine bars in this way.”

“John is a wine expert and does frequent posts for our Hot Dish blog, but he’s not a professional writer and certainly not a trained journalist,” Smith is quoted as writing to Dean.

“I think he honestly thought that, with a limited budget, that was the best way to tackle the story. My fault, I guess, for assuming most people understood how reviews are done and for not explaining the assignment carefully enough. In any case, it is definitely NOT our policy to ask for free food, and we put a stop to it when we found out. Our writers are supposed to review anonymously and pay for their meals.”

The letter is available here, at the bottom of Dean’s post.  Glas informed the restrauant owners that they are “one of 10 finalists for top wine bar in the Twin Cities, which will be the main article in the upcoming CITY PAGES WINE & DINE.”  Further, the winner was to be announced on Glas’ website.

As Dean noted, Glas’ request goes against the Association of Food Journalists’ code of ethics. The ethics code advises that members shouldn’t accept “gifts, favors, free travel or lodging, special treatment or privileges,” among other standards.

The AFJ, an international organization founded in 1974, also “subscribes” to the Society of Professional Journalists’ code of ethics, which doesn’t condone accepting gifts or favors.

iMediaEthics has written to City Pages’ Smith and to John Glas and will update with any response.