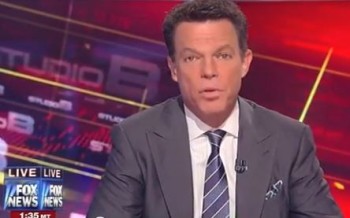 Last year, Fox News aired live footage of a man named JoDon Romero killing himself with a gun after a car chase.  Fox News had been airing video of the chase when Romero pulled a gun out.

A lawyer for the mother of Romero’s three children (aged between 9 and 15) has filed a lawsuit against Fox News for emotional distress, ABC News reported.   ABC News noted that according to the lawsuit, two of the three children heard about the suicide video but didn’t know it was their father. After searching for the video online, “they realized in horror that they were watching their father.”

As iMediaEthics wrote at the time, Fox News’s Shepard Smith, who had unsuccessfully tried to get the live coverage of the pursuit of Romero to be cut off, apologized on air after Romero’s suicide was aired, saying “we really messed up.”

The Hollywood Reporter published a copy of the lawsuit, filed by the children’s mother on their behalf.

The lawsuit says that the two older children haven’t “returned to school since viewing their father’s death on YouTube.” Further, the suit claims that because of the video, all three children have “severe emotional distress and psychological trauma.”

However, the Washington Post’s Erik Wemple questioned if the children were traumatized by the video or the suicide:

The network’s executive vice president for news editorial Michael Clemente called the incident of broadcasting the man’s death live a “severe human error.”  Video of the suicide was later published on many websites including Gawker, BuzzFeed and Mediaite.

The Washington Post’s Wemple noted that since the September airing of Romero’s suicide post-car chase, he hasn’t “seen any car chases on the network,” something he’s trying to confirm with Fox News.

iMediaEthics is writing to Fox News and the lawyer on behalf of the mother of the children listed in the lawsuit for comment and will update with any response.

UPDATE: 6/20/2013: Joel Robbins, who is one of the lawyers representing the children in the lawsuit, responded to iMediaEthics inquiry asking about the Post’s Wemple’s question about whether the children are traumatized from the suicide or the video of the suicide. Robbins wrote:

“Prior to the suit being filed we asked a prominent mental health professional to evaluate the children to address the specific question about whether there were added damages past the damages of a suicide.  She opined that there were significant damages to the children from the subsequent broadcast.  The damage of the loss of a parent due to suicide is obviously great.  The damage from publicizing the suicide and then putting the suicide out where it is immediately absorbed into the internet is obviously much worse.”

Further, Robbins argued that Fox News is responsible for putting the image online.  “Fox News in its failure to monitor its programing (the local Fox affiliate actually did, just the national show did not), the image of this suicide will be out on the internet forever, haunting the children,” Robbins wrote. “Their father didn’t chose to commit suicide on national television, Fox chose to broadcast the event.  Their choice and their failure has consequences that they should bear to the children who were harmed.”