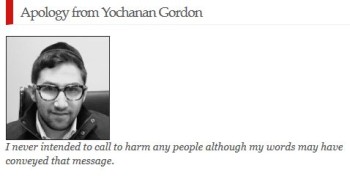 Times of Israel and New York website Five Towns Jewish Times both unpublished a blogpost calling for genocide in Gaza.

The blogpost, by Yochanon Gordon, was titled “When Genocide is Permissible.” It argued:

“Hamas has stated forthrightly that it idealizes death as much as Israel celebrates life. What other way then is there to deal with an enemy of this nature other than obliterate them completely?”

He said Israel’s “hands are being tied by world leaders” and that “there’s going to have  to come a time where Israel fells (sic)  threatened enough where it has no other choice but to defy international warnings — because this is life or death.”  Further, Gordon added, “anyone who lives with rocket launchers installed or terror tunnels burrowed in or around the vicinity of their home cannot be considered an innocent civilian.”

Read it below, via Mediaite.

When Genocide is Permissible _ Yochanan Gordon

Gordon defended his article at first, before apologizing, Mediaite reported.

“I never intended to call to harm any people although my words may have conveyed that message.

“I wish to express deep regret and beg forgiveness for an article I authored which was posted on 5TJT.com, Times of Israel and was tweeted and shared the world over.

“I never intended to call to harm any people although my words may have conveyed that message.

“With that said I pray and hope for a quick peaceful end to the hostilities and that all people learn to coexist with each other in creating a better world for us all.”

In place of Gordon’s article, the Times of Israel published an explanation for the “unacceptable” blogpost that was in “blatant breach of editorial guidelines.”

The Times called the blogpost “damnable and ignorant.”

“We have discontinued the writer’s blog,” the Times of Israel wrote. It went on,

“The Times of Israel maintains an open blog platform: Once we have accepted bloggers, we allow them to post their own items. This trust has rarely been abused. We are angry and appalled that it was in this case, and will take steps to prevent a recurrance. We will not countenance blog posts that incite to violence or criminal acts.”

“An article that was posted earlier today on our website dealt with the question of genocide in a most irresponsible fashion.  We reject any such notion or discussion associated with even entertaining the possibility of such an unacceptable idea.

“The piece should have been rejected out of hand by editors but escaped their proper attention.  We reject such a suggestion unequivocally and apologize for the error. ”

Gordon appears to have to take his Twitter down.

iMediaEthics has written to the Times of Israel and the 5 Towns Jewish Towns for comment.

UPDATE: 8/2/2014 11:11 AM EST  iMediaEthics has heard back from Times of Israel. We asked if it would continue to allow bloggers to post directly to its website after this incident, if Gordon would be allowed to submit anything ever again, and how long his article was published. The Times only sent the following statement

“The blog post, which was both damnable and ignorant, was uploaded by a blogger. It was removed by the Times of Israel for breaching our editorial guidelines. The blog has been discontinued.”