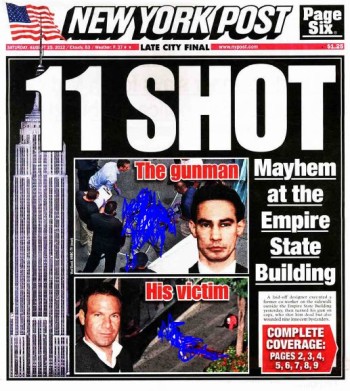 Many news outlets published graphic videos and photos from the Aug. 24 shooting at the Empire State Building — including photos of the dead shooter Jeffrey Johnson and his victim Steven Ercolino.

Meanwhile, the murder victim’s brother, Paul Ercolino, complained about the coverage, calling it “horrific journalism” and saying that the media — the New York Post and New York Times specifically “gave Osama bin Laden more respect and dignity than my brother, sprawled over the — with blood coming from him,” according to Gothamist.  (As we wrote at the time, President Barack Obama said that his administration wouldn’t release a photo of bin Laden’s corpse.)

We asked the New York Times if it had any response to Ercolino’s comments.  New York Times spokesperson Danielle Rhoades Ha gave us the company’s statement on the photo in general and said that the Times has “no further comment.” That statement reads:

“It is an extremely graphic image and we understand why many people found it jarring. Our editorial judgment is that it is a newsworthy photograph that shows the result and impact of a public act of violence.”

We have also written to the New York Post for comment on Ercolino’s claims and will update with any response.

In terms of local media, the front page of the August 25 New York Daily News featured a full-page photo of the scene, including the gunman.  The caption reads: “Gunman Jeffrey Johnson lies dead on sidewalk in front of Empire State Building.”  The New York Post ran graphic photos of “the gunman” and “his victim,” both dead, on its front page.  Newsday and The New York Times used photos of bodybags instead.  Poynter’s Jeff Sonderman noted that “Reuters and the New York Daily News both showed bodies on their homepage. The New York Times initially had a very subdued homepage, then made a bolder choice with blood flowing.”

That photo is the most graphic in the New York Times’ slideshow, “Shooting in Midtown Manhattan.”  According to the Atlantic Wire, which labeled the photo “startlingly graphic,”  Times‘ managing editor for news Dean Baquest said of the photo:

“It was a graphic image, of course. But it is a running news story and we thought it was a newsworthy image. We have heard from many people who found it jarring, and we understand that. We have also heard from some who thought it important to show the results of public acts of violence.”

Some of the graphic photos used in coverage included photos from social media or readers.  The Times also used photos from Instagram users in its coverage.  Mashable, which interviewed a person whose Instagram photo of a person who had been shot, posted the photo buried in its story, with an editor’s note at the top reading “Due to the photo’s graphic nature, Mashable has decided not to post the image high up in this story, but it’s embedded at the bottom.”

The Huffington Post published a video from the shooting, with a tag “WARNING: Video is extremely graphic.”  The video, which MyFoxNY reported was “released” by the NYPD, came from surveillance video.  Similarly, CNN posted a video from a witness’s cellphone, which it labeled in bold as “graphic and terrifying.”

CBS News also published a slideshow of the shooting with the tag “WARNING: Some of the following photos are graphic in nature.”

Gawker also published graphic photos sent by a “tipster” and noted in its headlines pictures were “Graphic.”

iMediaEthics wrote last year about a “troubling double standard” in American photojournalism, where the American media often won’t show photos of dead Americans, but will of dead foreigners.