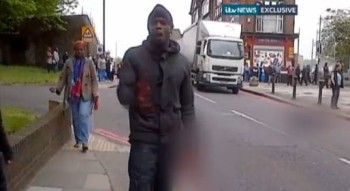 A screenshot from the video. (Credit: ITV, screenshot)

British news outlets including ITV and the Guardian published video of what happened after last week’s fatal attack on soldier Lee Rigby in Woolwich. The video showed one of Rigby’s alleged killers holding a bloody cleaver and “delivering a politically-charged diatribe,” according to the Press Gazette.

Here’s the video on ITV’s website with its warning about the “graphic images.”

News outlets including the Sun and ITV defended the decision to publish the video because they said it was in the public interest, Press Gazette reported.  The Sun‘s managing editor Richard Caseby acknowledged though that the video was “very graphic and disturbing.”

Press Gazette further noted that “Neither The Sun nor ITV News would say whether they paid for their footage” using checkbook journalism.

Hold outs included Sky News, which decided not to publish the video because it could “have been unnecessarily distressing,” and the Daily Express newspaper.

Broadcast and publication of the shocking images from the killing and its mayhem resulted in dozens of reader complaints to the UK Press Complaints Commission and The Guardian.

The PCC’s Jonathan Collett told iMediaEthics by email that, as of May 29, 94 complaints were lodged over “newspapers and magazines'” reports on the attack.  “We hope to be able to provide a break down by publication at a later time,” Collett wrote.

In a May 26 column, the Guardian‘s readers’ editor Chris Elliott said he had “received around 40 emails about the newspaper’s front page and the decision to host the video” of the post-attack. Complaints focused on the video being “too graphic” or “too sensationalist.”

However, Elliott quoted Guardian editor-in-chief Alan Rusbridger as defending the coverage because not only was it “an extraordinary, perhaps unprecedented, event” and “a unique news picture” but also something that had already been “around in the world virtually in real time.”

Guardian media blogger Roy Greenslade argued that media outlets were right to publish the footage and images despite it being “appalling.” Writing of knife-holding Michael Olumide Abebolajo, a suspect in the soldier’s death who was featured in the video, Greenslade suggested, “It could be said that the media were playing into his hands by giving him the publicity he was seeking. But, given the situation, there was a need to explain.”

Further, Greenslade said the video had to be published:

“I think the newspapers were correct because they needed to convey the brutality of a murder that appeared to have been carried out as an act of terrorism. It was shocking to see it but it was even more shocking that it happened at all.”

ITV News, which did show the video, only showed a portion of the clip because it edited out what the Guardian described as “an apparent confession” from suspect Abebolajo but the reason for the edit isn’t apparent. ITV also blurred out the cleaver and what appeared to be Rigby’s body.

In the cutting room floor portion not shown by ITV News, the charged culprit Abebolajo said: “The only reason we have killed this man today is because Muslims are dying daily by British soldiers.”

According to the Guardian, the edit was spotted because the Sun had the same video without the edit.

iMediaEthics has written to ITV asking why it edited the clip. An email has also been sent to UK broadcast regulator OfCom asking how many complaints about the video and news accounts of the brutal murder it has received.