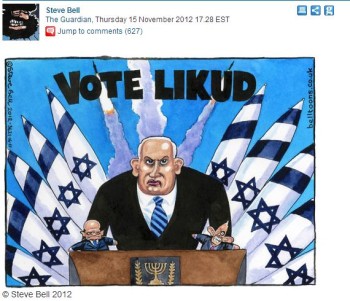 Was the Guardian‘s cartoon picturing “Israeli Prime Minister Benjamin Netanyahu as a puppet-master, controlling tiny versions of Foreign Secretary William Hague and Tony Blair” anti-Semitic?   Check out the cartoon by Steve Bell above.

The Jewish Chronicle reported that some, including Jeremy Brier and UK charity the Community Security Trust, say yes, noting the Nov. 15 cartoon already has prompted a complaint to the UK Press Complaints Commission.

In a separate story, The Jewish Chronicle reported that Bell said the cartoon is a “counter argument” to how “the coverage of Operation Pillar of Defence has been so skewed in favour of the Israeli side, particularly I regret to say on the BBC.”

Bell added that he would “refute completely any charge of antisemitism,” and noting that “I can’t be held responsible for whatever cultural precepts and misapprehensions people choose to bring to my cartoon. My intention, I think, is fairly clear.”

The Guardian on Nov. 20 also published a collection of letters to the newspaper featuring the “squabble” over the cartoon.

iMediaEthics has written to the Guardian asking for a response to the anti-Semitism accusations and will update with any response. We also asked Bell about the controversy and his 31-year history cartooning for the Guardian.

See all of iMediaEthics’ stories on media ethics related to cartoons.

Earlier this week, News Corp. CEO Rupert Murdoch apologized to the Anti-Defamation League for tweeting about the “Jewish-owned” media, Mediaite reported.   iMediaEthics wrote earlier this week about Murdoch’s tweeted apology for those tweets.

UPDATE 11/27/2012 10:15 AM EST: Guardian readers’ editor Chris Elliott weighed in on the cartoon Nov. 25, the Jewish Chronicle noted.  Elliott reminded that Bell is “adamant” he wasn’t “intentionally, nor unintentionally antisemitic,” and quoted Bell as saying the cartoon was “not about the Jews: it’s about Binyamin Netanyahu. It’s referring to a specific news image. [The puppets] are a side issue…”

For his own  part, Elliott wrote:

“I don’t believe that Bell is an antisemite, nor do I think it was his intention to draw an antisemitic cartoon. However, using the image of a puppeteer when drawing a Jewish politician inevitably echoes past antisemitic usage of such imagery, no matter the intent.”