Guardian may re-publish Emma Keller Post on Lisa Adams, 'I continue to regr

Guardian may re-publish Emma Keller Post on Lisa Adams, ‘I continue to regret not giving her notice,’ Keller says 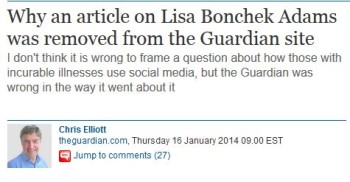 Emma Keller should have told Lisa Adams, who has stage-4 breast cancer, that she was writing about her, Guardian readers editor Chris Elliott concluded in a report published today.

“While there was no obligation for Keller to tell Adams that she intended to write the article drawing on public tweets, I strongly feel Keller should have done so in such a sensitive situation,” Elliott wrote.

Keller herself told Elliott: “I continue to regret not giving her notice about the piece. In the circumstances it would have been the compassionate thing to do and Lisa deserved that.”

Earlier this week, the Guardian unpublished Keller’s blogpost about Adams after much criticism and Keller’s admission that she quoted from a private message from Adams. On Twitter, Adams wrote that Keller’s post had “many inaccuracies.”  The Guardian told iMediaEthics Jan. 13 that the story was unpublished “following an investigation by the Guardian‘s independent readers’ editor…because it is inconsistent with the Guardian editorial code.”

In his report today, Elliott explained the background of how Keller’s post came to be.  According to Elliott, Keller “got to know of Adams online when Keller hosted  – as part of her Guardian US series The Living Hour – a live chat on DNA and cancer tumours in early November 2013.”   Keller “herself had treatment for breast cancer,” Elliott noted.

The article was unpublished after receiving Adams’ Jan. 11 complaint e-mail “because I felt some space was required to allow reflection,” he wrote. And, the article may go back up after Elliott has “fully resolved all issues.” He said he asked Adams about writing “a response entirely from her point of view” when she can and if she wants, but noted how the Guardian is limited in fully correcting the record:

“One of the many difficulties in trying to resolve the complaint is that the complainant is undergoing painful treatment. While she has continued to tweet from hospital, she has made clear in the two emails the Guardian has received from her that she does not feel she should have to take time from her treatment to engage with the process of correcting what she believes is wrong in the piece. I entirely understand and respect her position. In the emails to the Guardian she said that the column was ‘callous’ in its treatment of her.”

Elliott listed three errors that he found in his investigation, though:

I want to reiterate that I have not tweeted 160,000+ times about cancer. Most of my tweets are conversational (“thanks!”) … they are replies

As a sidenote: While originally the Guardian website stated the article was removed because “the article was in contravention of the Guardian‘s code of conduct,” Elliott said that was his “mislabelled” explanation.  “Within an hour I changed the footnote when I realised that the issue needed more consideration and that the writer had not had a proper opportunity to respond to an email,” he wrote.

Still have work to do to try to correct inaccurate statements still in print at NYT about my health status. 1/2
— Lisa Bonchek Adams (@AdamsLisa) January 14, 2014

Guardian may re-publish Emma Keller Post on Lisa Adams, ‘I continue to regret not giving her notice,’ Keller says