Hoax: Watching Sunrise on TV because of Smog in China? Daily Mail, Time and 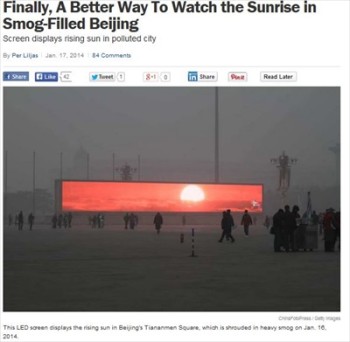 Time magazine published a correction on its report about Beijing residents using TVs to see the sunrise (Credit: Time, screenshot)

News outlets including the Daily Mail, Time magazine and the Daily Mirror published a fake story that China is using TV screens to show the sunrise, Mediaite reported.

While Time magazine has published a lengthy correction admitting that the sunrise image used as evidence is actually from an ad, other outlets like the Daily Mail have not done so.

The Daily Mail story, published Jan. 16, is titled: “China starts televising the sunrise on giant TV screens because Beijing is so clouded in smog.” It reported that Beijing residents are watching “virtual sunrises” because the smog is so thick people can’t see the real sunrise.

Mediaite pointed to Tech in Asia reporter Paul Bischoff, who debunked the sunrise TV screens. Tech in Asia is “an online technology media company based across Asia and the U.S.” Bischoff wrote

“In truth, that sunrise was probably on the screen for less than 10 seconds at a time, as it was part of an ad for tourism in China’s Shandong province. The ad plays every day throughout the day all year round no matter how bad the pollution is. The photographer simply snapped the photo at the moment when the sunrise appeared. Look closely, and you can even see the Shandong tourism logo in the bottom right corner. The photo was credited to ChinaFotoPress via Getty Images, so a Daily Mail reporter did not take it.”

Bischoff slammed media outlets that were duped:  “Yes, Beijing is polluted, as we at Tech in Asia have also been critical of, but this story is complete bullshit. International media should be embarrassed for not taking even a moment to second guess the Daily Mail, one of the least reputable news sources in the UK.”

Time magazine has since published two corrections admitting that the sunrise TV screens are part of an ad. Time‘s corrections read:

“The original post did not mention that the large screens in Beijing’s Tiananmen Square broadcast panoramic scenes on a daily basis, regardless of atmospheric conditions, nor did it state that the sunrise was part of a tourism commercial. Amendments have been made to correct these lacunae.”

Huffington Post noted the sunrise “appeared to be part of an advertising campaign” but wrote: “Despite hazardous levels of smog and limited visibility, you can still enjoy the sunrise in China’s Beijing. You’ll have to watch it on TV, though.”

The UK Daily Mirror was duped. Its Jan. 19 report read:

“Do not adjust your set – this screen is now the only chance Beijing residents have of seeing the daily sunrise in their city.

“Broadcast on giant panels usually reserved for tourist advertisements, the footage highlights the extent of the problem of dangerous air pollution

“A lack of sky vision has become such an issue that people now flock to the screens which are located at several points.”

“Like something out of a sci-fi novel from 50 years ago, residents of Beijing find themselves looking at alternative versions of a landscape they can’t see anymore due to high levels of smog. High-tech screens placed around the city’s capital, which advertise tourist attractions, also include virtual sunrises.”