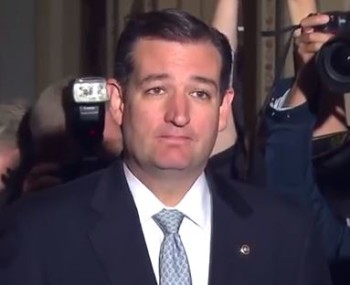 The Houston Chronicle called out media outlets that “inaccurately characterized our Wednesday editorial” on Sen. Ted Cruz.
The Chronicle had published an editorial titled “Why we miss Kay Bailey Hutchison.”  In response to that editorial, which criticized Cruz’s work in the Senate, numerous media outlets reported that the Chronicle backtracked or took back its endorsement of Cruz, only later to add clarifications and updates on their stories.
The editorial had praised Hutchison, a former senator from Texas, for her “unswerving commitment to the highest and best interests of Texas at all times” as well as her “extraordinary understanding of the importance of reaching across the aisle when necessary.”
“Neither sitting Texas senator has displayed that useful skill, and both the state and the Congress are the poorer for it,” the Chronicle wrote. The Chronicle went on to say that its 2012 endorsement of Cruz for senator was “with many reservations and at least one specific recommendation — that he follow Hutchison’s example in his conduct as a senator,” which the Chronicle said he hasn’t.
In response to that editorial about its endorsement and Cruz’s performance in the Senate, many media outlets reported that the Houston Chronicle backtracked or took back its endorsement of Cruz.
The Chronicle responded to media coverage of its editorial with an op-ed post, “Did we un-endorse Ted Cruz? No.” The Chronicle wrote:
“Some news outlets earlier today inaccurately characterized our Wednesday editorial offering tribute to the statesman-like ways of former U.S. Sen. Kay Bailey Hutchison. We did not pull our endorsement of U.S. Sen. Ted Cruz. Our references to Cruz served to provide context to the Hutchison tribute by emphasizing her ability to reach across the aisle when necessary. “
Further, the Chronicle said “It is not unusual, and certainly not extraordinary, for newspaper editorial boards to constructively reflect on the tenures of elected officials whom the panel has endorsed and criticize their performances when we deem it necessary.”
Shortly after the Chronicle published its clarification, iMediaEthics saw many news outlets posting clarifications or updates on their stories. Here are five.
USA Today wrote about the Chronicle’s clarification and said it was “updating” its earlier story about Cruz being un-endorsed.
The Huffington Post added an “update” to its story after hearing from the Chronicle. The Chronicle had sent the Huffington Post a statement saying that it “did not pull” Cruz’s endorsement.
Likewise, ABC News posted an update to its story, “Why Ted Cruz’s Hometown Newspaper May Regret Endorsement.” That update reads:
“UPDATE: This post has been updated to reflect that the Chronicle has not withdrawn its endorsement of Cruz.”
The Washington Post added a “clarification” to its blogpost, “The Houston Chronicle criticizes Ted Cruz.” That clarification reads:
“Clarification: Veronica Flores-Paniagua, the Outlook editor for the paper, said  the editorial board it is not pulling its endorsement of Cruz, but rather simply criticizing Cruz and praising Hutchison. The headline and lead have been updated to reflect this.”
And Forbes added an update to a post by Rick Ungar titled “The Houston Chronicle Un-Endorses Ted Cruz.” While the update notes that Houston Chronicle Outlook Editor Veronica Flores-Paniagua said “the paper did not un-endorse Senator Cruz but were merely being critical of him,” Ungar defended his post about the Chronicle.
He wrote:
“It should be noted that when I asked Ms. Flores-Paniagua if the paper would endorse Senator Cruz if the election were being held today, she chose not to respond to the question.
“My suggestion to readers would be to read The Chronicle’s editorial and decide for yourself. While it remains difficult for me to view the writing as anything other than precisely how I have characterized the editorial, please read it with the knowledge that the newspaper does not view the editorial as an un-endorsement.”
iMediaEthics has written to the Houston Chronicle asking for further comment and will update with any response.