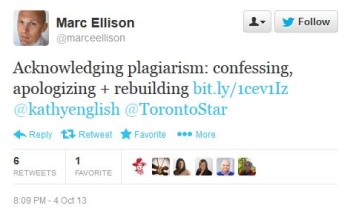 Marc Ellison admitted in a blogpost that he "knowingly plagiarized." (Credit: Twitter, screenshot)

In an Oct. 4 column, Toronto Star public editor Kathy English provided a bit more information about a recent plagiarism case at the newspaper, revealing that the reporter “is no longer with the Star” and that the paper reviewed his work.

As iMediaEthics wrote Friday morning, the Star admitted in a “public editor note” that an August article on vanity license plates lifted from a 2010 Star article.  The 2013 article was written by Marc Ellison, whose relationship to the Star was a bit fuzzy: the Star listed him as a “staff reporter,” his own Twitter account called him a freelancer, and on Twitter, he was identified as a summer intern.

We wrote to English and Ellison this past week to learn more information about this case but didn’t hear back.  However, our questions — what happened, did the paper review all of Ellison’s work, what exactly was Ellison’s role at the Star and how the Star discovered the plagiarism — were addressed in English’s column. Ellison also blogged about his plagiarism.

English wrote that some readers questioned where the line is between plagiarism and re-hashing old file information from the Star’s stories.  “In recent days I’ve heard from several journalism professors, as well as reporters, columnists and editors from the Star and other news organizations, all seeking answers to the same questions: What’s up with that plagiarism correction? Can’t Star reporters take material from the Star’s own archives?” she wrote.

According to English’s column, Dale, who wrote the 2010 article that was plagiarized, spotted the plagiarism and alerted the newspaper.

“When Dale read Ellison’s story he pointed out the strong similarities to his previous work on that same topic to City Editor Irene Gentle,” English reported.

Dale told English: “I’m not dead, I still work for the Star, and Marc had told me he was doing the story, yet he seemed to assume that I wouldn’t notice that he’d copied my work, which remains puzzling to me.”

According to English, Ellison owned up to the plagiarism, which he called “frankly inexcusable,” and the result of doing too much in too little time.  “I’m sorry to have not only embarrassed the Star, but also to have drawn upon the work of Daniel in this manner,” English quoted him as saying.

While English didn’t explicitly detail what the Star’s review of the Ellison’s work included, she did list some actions the paper took in response to the discovery: “As is the Star’s practice whenever any plagiarism comes to light, we have examined much of Ellison’s reporting from his summer stint and found no other problems. He is no longer with the Star, as he’d planned from the outset of his internship.”

Ellison also blogged about his plagiarism incident, which he called “professional harikiri.” According to Ellison, the Star discovered the plagiarism “a month ago,” which iMediaEthics notes is interesting considering the Star just published the public editor note last week.

Ellison confessed that he “had knowingly plagiarized.”

“As I clicked on the ‘publish’ button back in August, I knew what I was doing wasn’t right, wasn’t up to my usual journalistic standards,” Ellison wrote. “I’d never plagiarized before in my life. And so with this confession came relief.”

Ellison said that deadlines and exhaustion contributed to why he plaigarized, “but frankly, I can’t make excuses for the inexcusable. No matter how much pressure there is in a newsroom, no matter how tired you may be, there’s no justifying plagiarism.”

He added that English’s column about the plagiarism felt like “public humiliation,” but that he plans to continue working in journalism and accept what he did. “I’ve decided to take the harder path, to take this knock fully on the chin, hold up my hand, admit my mistake, and to slowly try to regain people’s trust and to become a better journalist,” Ellison wrote.