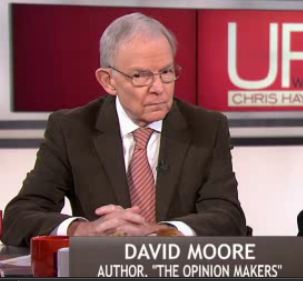 “One of the problems we have with public policy polling is that a lot of people, probably anywhere from a third to a half, are unengaged on any given issue,” iMediaEthics’ in-house polling critic David Moore said today in an appearance on MSNBC’s Chris Hayes show.

Moore added: “But the polls always use these forced choice questions: They say do you approve it or disapprove it and they don’t get you to say you don’t have an opinion…Polls really overstate the percentage of people who have an opinion. They really are able to influence what people say by the context and the question wording in a way that is I think bad for democracy.”

Other guests during the segment “Why Polling Makes Us Crazy,” were Nate Silver of fivethirtyeight.com, Zephyr Teachout of Fordham University’s School of Law and Maya Wiley of the Center for Social Inclusion.

Check out videos of the Oct. 14 show: