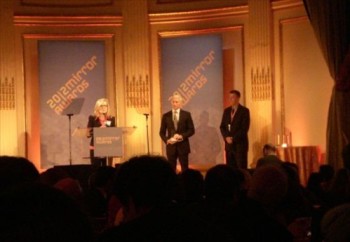 Today was the sixth annual Mirror Awards ceremony, held at the Plaza Hotel and emceed by CNN‘s Anderson Cooper.  The awards, given by Syracuse University’s Newhouse School of Public Communications, single out journalists “who hold a mirror to their own industry for the public’s benefit.”

iMediaEthics’ story, by publisher and editor-in-chief Rhonda Roland Shearer and Pakistani correspondent Malik Ayub Sumbal, reported on the “troubling double standard” in photojournalism, where American media will publish graphic photos of dead or injured foreigners, but not similar photos of Americans.  The report was the first in our special investigation series on the media’s coverage of the 2007 assassination of former Pakistani prime minister Benazir Bhutto.

We also tracked down an iconic figure from the footage and images of the Bhutto murder scene — an unnamed man wearing a brown jacket who was pictured grieving and in shock countless times.  Brown Jacket Man, who iMediaEthics found, was identified as Muhammad Yaseen Khan and interviewed. Though he was shown in countless photos taken at the Bhutto murder scene, Muhammad Yaseen Khan was never named or interviewed.  Instead, media outlets like the Associated Press guessed to describe him in their photo captions.  iMediaEthics’ exclusive interview with Yaseen revealed that he didn’t know at the time he was being photographed and that he was a close aide to Mrs. Bhutto.  (Read iMediaEthics’ winning story in full here.)

RT loses appeal of OfCom fine
Corrections: The Roomba didn't do it! Irish Libel Law, Irish or British, How many Troops Abroad?