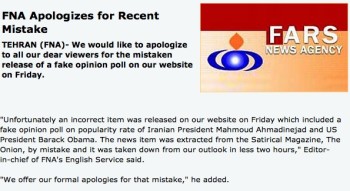 According to CNN, the agency “used the story verbatim” with the “same headline” from The Onion‘s satirical article “Gallup Poll: Rural Whites Prefer Ahmadinejad to Obama” but with a different dateline. The Onion report said that “a Gallup poll found that rural white Americans prefer Iranian President Mahmoud Ahmadinejad over President Barack Obama,” CNN summarized.

The New York Times added that the Fars News Agency publication didn’t mention The Onion, edited out commentary of Ahmadinejad, and made small changes.

CNN reported that The Onion‘s editor, Will Tracy, joked that Fars News Agency is The Onion‘s “Middle Eastern bureau since the mid 1980s, when the Onion‘s publisher, T. Herman Zweibel, founded Fars with the government approval of the late Supreme Leader Ayatollah Khomeini.”

The New York Times noted that Fars News Agency did apologize for the “recent mistake” in re-publishing The Onion article.  The Fars News Agency’s Sept. 30 apology reads in part that an unnamed editor-in-chief said

“Unfortunately an incorrect item was released on our website on Friday which included a fake opinion poll on popularity rate of Iranian President Mahmoud Ahmadinejad and US President Barack Obama. The news item was extracted from the Satirical Magazine, The Onion, by mistake and it was taken down from our outlook in less two hours.”

Further, the editor-in-chief said the agency “makes every effort to ensure the accuracy of its reports, however very occasionally mistakes do happen.”  Also, the editor is quoted as saying that “Although it does not justify our mistake, we do believe that if a free opinion poll is conducted in the US, a majority of Americans would prefer anyone outside the US political system to President Barack Obama and American statesmen.”

The apology details other people and news outlets that were hoaxed by The Onion or other “goofs.”  The BBC noted that eight years ago, Beijing Evening News ran an Onion story and three years ago “two Bangladeshi newspapers apologised after publishing an Onion article.” We wrote last year when the New York Times corrected an article that included a fake magazine cover showing Barack Obama on the cover of Tiger Beat magazine published by The Onion.

iMediaEthics has written to Fars News Agency for more information and will update with any response.