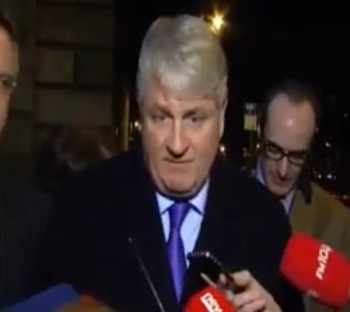 In what is being called a “landmark case,” the Irish Daily Mail must pay Denis O’Brien, who controls Irish media group Independent News and Media, €150,000 in damages for libeling him in a 2010 article. The article in question “criticised his appearance” in TV interviews about his role and experience in Haiti after the earthquake, Irish broadcaster RTE reported.

According to RTE reports, O’Brien said the Daily Mail “accused him of hypocrisy motivated by self interest” and a “PR exercise.”   The article, by Paul Drury, was titled “Moriarty about to report, no wonder O Brien is acting saintly in stricken Haiti.” It appears the article has been taken off the Mail’s website as iMediaEthics was unable to find the article online.

“It was the first major media defamation case to come before a jury at the High Court since the Defamation Act 2009 came into force.

“It is the first time a jury considered the new defence of honest opinion.”

There have been several high-profile libel lawsuits in Ireland in the past years, though, as iMediaEthics has written.  This “honest opinion” defense means, according to the website of Irish law firm Brophy Solicitors:

“The defence of honest opinion will be upheld in an action for defamation if it can be proven that the statement consisted of an opinion that was honestly held. The courts will distinguish between statements of fact and opinion when this defence is raised.”

During the trial The Daily Mail’s attorney Oisin Quinn said, according to Irish Central,

The columnist, Drury, added during the trial:

“I was offering a legitimate piece of opinion on a matter of enormous public interest that affected and continues to affect every one in this country.”

According to RTE, in this case, the Mail lost because the jury found the opinion was wrong:

“While the jury agreed the piece was based on the honest opinion of the writer, they decided it was not an opinion based on fact and was not in the public interest.”

“Mr O’Brien replied that the Press Council did not have any teeth and he rejected the suggestion that a right of reply was the way to deal with the issue.”

The Press Council’s Miriam Laffan confirmed to iMediaEthics that O’Brien didn’t use the press council and said in response that reported comment that “Although we have not seen a transcript of the trial we have no reason to believe that this is not correct.”

Laffan also provided iMediaEthics with a press release from the Press Council of Ireland and the Press Ombudsman in response to O’Brien’s comments. The press release was signed by the council’s chairman Dáithí O’Ceallaigh and noted that while the council and ombudsman usually stay out of court cases, he wanted to “emphasise” certain things. He wrote:

“I have received a number of requests for a response to recent statements about the Council and the Office of the Press Ombudsman which appear to be based on a lack of knowledge of the record of these institutions, and a lack of awareness of its effectiveness and relevance in the matter of disputes concerning the press.”

O’Ceallaigh went on to measure the “public confidence” in the council’s Code of Practice and regulation through “an independent system which editors do not control” by noting that “in the five years since it was established, it has received almost 2,000 complaints.”  He added that “Nothing in our procedures prevents anyone having recourse to the courts.”

The Daily Mail may appeal the case, according to RTE.

iMediaEthics wrote last year when O’Brien claimed Independent Newspapers — the company he owns 21.6% of — had “biased campaigns” against him in order to “discredit” him.  Shortly after O’Brien’s claims were made in a letter to the company, Independent News and Media’s CEO resigned.