Is Climate Change Real? Opinion Depends On Which Political Party You Belo

Is Climate Change Real? Opinion Depends On Which Political Party You Belong 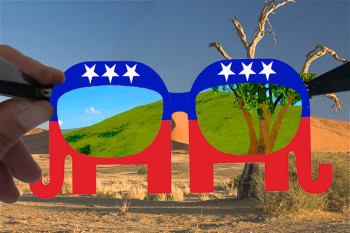 It might seem strange that the issue of man-made global warming, or climate change, has become a partisan matter. What policies are needed to mitigate this development will, of course, entail partisan differences. But the question of whether climate change itself is actually occurring, and how much of such change is caused by the actions of human beings, is an empirical issue, which depends not on one’s values or ideology, but on scientific measurement and analysis.

The scientific community has reached near unanimous agreement: The vast majority of scientists who deal with climate-related issues, and virtually all scientific organizations, agree that climate change is a man-made problem that needs to be addressed.*

Nevertheless, in the United States today, the question of climate change itself divides Americans by partisan orientation. This point is reaffirmed by the new Post-Gazette/iMediaEthics poll, which shows a solid majority of Democrats saying that man-made climate change is happening now (68 percent to 20 percent), while a majority of Republicans take the opposite position (53 percent to 30 percent).

Republicans, by contrast, are about evenly divided, with 31 percent saying most scientist are in agreement, and 32 percent saying there is little agreement among scientists on this issue. The rest are unsure.

While this pattern of partisan divide has been evident for some time, the new poll provides even more startling results. We might expect that the more people have paid attention to the issue of climate change, the more likely they would be to accept the position of the preponderance of the scientific community. And that is the case – but only for Democrats and independents. For Republicans, the more closely they follow the issue, the more likely they are to reject man-made climate change.

Among Republicans who pay only moderate or less attention to the issue, for example, 49 percent deny man-made climate change is happening now, but among those who say they follow the issue “very closely,” the number increases to 68 percent. Similarly, just 25 percent of the moderate to low attentive Republicans deny that a scientific consensus exists on the issue, but among the most attentive, the number of deniers increases to 45 percent.

Unlike Republicans, Democrats and independents are more likely to accept the scientific consensus the more closely they pay attention to the issue. Among relatively inattentive Democrats, for example, just 53 percent say man-made climate change is happening now, while among the more attentive, 79 percent take that position. Similarly, only 35 percent of Democrats paying little attention to climate change are aware of the widespread scientific consensus on the issue, compared with 78 percent of Democrats following the issue closely. A similar pattern is found among independents.

It is not a mystery why Republicans are more prone to be misinformed than independents and Democrats. Many national Republican leaders and numerous conservative news sites deny the existence of man-made climate change and promulgate the fiction that there is little agreement among scientists on the matter. The reason: To admit that climate change is at least partially caused by human behavior would require action to curtail greenhouse gases. And only government can enforce such action. But that approach flies in the face of an anti-government ideology that has permeated much of the Republican Party.

This article was cross-published as an op-ed in the Pittsburgh Post-Gazette August 10, 2014.

This poll was commissioned by iMediaEthics and the Pittsburgh Post-Gazette. Read the Post-Gazette’s news story on the poll and an opinion piece by David Moore.

See the poll’s methodology and the full poll report.

Is Climate Change Real? Opinion Depends On Which Political Party You Belong