Is Public Distrust in Government at the 'Boiling Point'?

Is Public Distrust in Government at the ‘Boiling Point’? 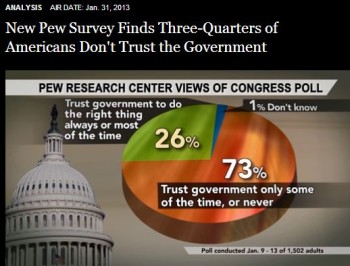 According to Pew’s latest poll, as introduced by Judy Woodruff on the PBS Newshour, “about one-quarter of Americans trust government to do the right thing always or most of the time. A whopping 73 percent don’t.”

Whopping indeed! Andrew Kohut, Director of the Pew Research Center that released the poll’s results, spoke with Woodruff about the results and reinforced the bad news by noting that Americans are “at the boiling point,” they’re not getting what they want out of Washington, and “public patience is not endless.”

That sounds really, really bad – as though the country might be on the verge of a revolution!

Yes, putting the results that way makes for a dramatic news story, but a closer look at the numbers suggest things are perhaps a little less scary than Kohut makes them out to be.

The Pew poll, for example, found only 19 percent of Americans who say they are “angry” with the federal government. A majority (58 percent) are “frustrated,” and 20 percent are “basically content.” While you’ve got to wonder where that last group has been for the past several years — that they are actually happy with the government’s performance — the fact that a majority of Americans are “frustrated” with government doesn’t really sound all that bad to me. “Most Americans Frustrated With Government!” Sounds about right. Not as dramatic, though, as “Americans At Boiling Point!”

Furthermore, “distrust in government” apparently doesn’t really mean the “government” itself, but rather some government leaders. The Pew poll found 56 percent of Americans saying the government system “can work fine; it’s the members of Congress that are the problem.” Just a third believe the system itself is broken.

Amorphous Concept of “Trust in Government”

One of the problems in talking about “trust in government” is that the concept itself is elusive. We can get different reactions from the public simply by slightly varying the wording of the trust question.

Pew chooses to use a question, first asked by the American National Election Studies in 1958, that offers only three options:

“How much of the time do you think you can trust the government in Washington to do what is right? Just about always, most of the time, or only some of the time?” (“Never” is a volunteered response.)

“How much trust and confidence do you have in our federal government in Washington when it comes to handling international problems – a great deal, a fair amount, not very much, or none at all?”

“How much trust and confidence do you have in our federal government in Washington when it comes to handling domestic problems – a great deal, a fair amount, not very much, or none at all?”

The Gallup trends are shown below:

This trend shows at least a majority of the public expressing high governmental trust for the past decade and a half. The high point, ironically, was right after the failure of the government to prevent the 9/11 terrorist attacks on this country – as the public rallied around their leaders.

The trust in government on handling domestic problems is always lower than trust in handling international problems, because people pay more attention to domestic issues, which generally affect them more directly.

Again, the high point occurred during the rally effect after 9/11. In the past five years, trust seems to reflect mostly the partisan split in the country – except in 2011, when a clear majority of the public expressed low trust in the wake of the debt ceiling crisis.

Overall, the Gallup measures of trust present a much more positive view than Pew’s measure. In contrast to Kohut’s Cassandra-like characterization of the public’s low trust in government, Gallup concludes that “Americans are feeling more confident about the federal government’s ability to handle both international and domestic problems than they have in several years.”

So, which version of the public is the right one?

Take your choice. Personally, I think the government does the right thing some of the time, and that makes me happy.

Is Public Distrust in Government at the ‘Boiling Point’?