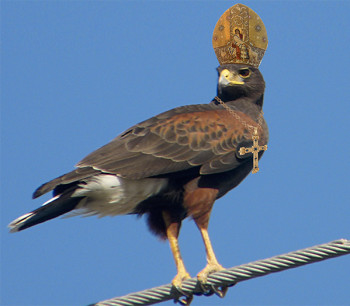 How did The Guardian  and other news outlets ever fall for a bogus story claiming the Vatican hired a hawk as part of Pope Francis’ security team?

The Guardian unpublished a story claiming just that. The Washington Times and Agence France-Presse were also duped by the hawk story, which originated as an April Fool’s prank from the website Independent Catholic News.

The story, headlined, “Vatican introduces new security measure in St Peter’s Square,” claimed the Vatican acquired a hawk, named Sylvia, to make sure none of Pope Francis’ doves are attacked. The story read,

“On 26 January this year, two white peace doves were attacked by a crow and a seagull, seconds after they were released from a window in the Apostolic Palace by Pope Francis, accompanied by two young children. One dove lost several feathers in the fracas.”

The Independent Catholic News’ founder Josephine Siedlecka said the hawk story was the site’s “most successful” April Fool’s joke yet.  “I’m astonished people fell for it,” she said to the Catholic Herald. “I thought it was too obvious.”

Siedlecka told iMediaEthics by e-mail that the site typically posts a story on April 1 as a joke as long as it is not mean-spirited.

“I like to publish an April Fool story every year (unless like last year it falls on Palm Sunday or something like that) and always make sure it is very clearly dated,” Siedlecka wrote.  “I also feel its really important not to have a victim or be nasty.  The images for this one seemed so daft, with a deliberate miss-spelling  I think on the day a lot of people just had a laugh about it.”

Siedlecka included several images that were very silly that showed the hawk on a guard’s head and shoulder to seemingly support the prank story. See one below.

Siedlecka said that news outlets didn’t seem to notice the prank story until April 9, but that none of the outlets in question “contacted me to verify the story that we published.”

“More importantly no one quoted us as the source – which is a bit naughty,” Siedlecka wrote.

“I hope no one got into trouble over this – as it’s the sort of mistake a tired reporter could make,” Siedlecka added.

Siedlecka pointed out four important tips for journalists, such as to fact check, to “name the original source,” to try to include additional reporting, and to “exercise caution with any story dated 1 April.”

News outlets that were duped

The Guardian’s story has been replaced with a note reading,

“An agency story about the Vatican recruiting a hawk to protect the Pope’s doves was deleted on the 15 April 2014 because it was discovered to have been an April fools’ joke.”

iMediaEthics wrote to the Guardian seeking more information about this incident, including to ask if it published the hoax story in print as well. A Guardian spokesperson told iMediaEthics by e-mail:

“The article in question was agency copy which we published online for a few hours. It was taken down once it was discovered to have been an April fools’ joke. The note that has replaced the article represents the Guardian‘s correction in this matter.”

The AFP’s story is still published on the Times of India website.

Chris Lefkow, the Chief Editor for AFP North America, told iMediaEthics by e-mail that the AFP published a follow-up story the same day as the original report, April 9, that reported the story was a prank.

Interestingly, the AFP reported on the story of the hawk hire being a hoax, but didn’t acknowledge the AFP also published a story on the hawk claim.  Instead, the AFP’s follow-up story reported that Catholic weekly Credere almost published a story about the hawk being added to Vatican security. The follow-up AFP story reported the story was a hoax and that Credere decided against publishing when it found out the story was a prank.

iMediaEthics asked if the AFP published a story acknowledging it was hoaxed or sent out a correction over the wire for its initial story. Lefkow responded that the AFP sent the “followup below with the tag line ‘ADDS Vatican denial’”

The Washington Times also reported on the hawk story, sourcing the claims to AFP.

iMediaEthics has also written to the Washington Times to ask if it will post a correction. We’ll update with any additional information.