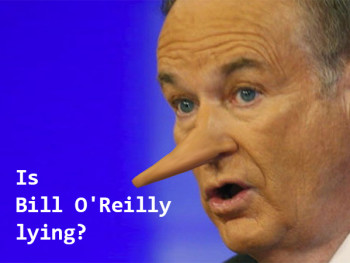 In the time since Mother Jones first questioned Fox News’ Bill O’Reilly’s accounting of his reporting history, more claims have been raised against the Fox News anchor.

iMediaEthics rounded up a list of the claims against O’Reilly and his defenses in a Feb. 24 report. Below is a list of the new questions about O’Reilly’s past.

When asked for comment on the latest series of questions about O’Reilly, a Fox News spokesperson told iMediaEthics by e-mail that O’Reilly’s ratings have gone up, pointing to Variety‘s report on his ratings, and provided the following statement in support of O’Reilly:

O’Reilly had said in a 2005 interview and a 2012 episode of his own program that he saw nuns “get shot in the back of the head” in El Salvador during the 1980 war, progressive media watchdog Media Matters pointed out.

But that wasn’t true because O’Reilly admitted in his book The No Spin Zone he didn’t go to El Salvador til 1981 and the nun deaths was in 1980, Mediaite reported.

But O’Reilly admitted he didn’t actually see the nuns get shot, instead saying he only saw pictures and no one thought he was saying he was there. In a statement sent to iMediaEthics by Fox News public relations, O’Reilly said:

“While in El Salvador, reporters were shown horrendous images of violence that were never broadcast, including depictions of nuns who were murdered. The mention of the nuns on my program came the day of the Newtown massacre (December 14, 2012). The segment was about evil and how hard it is for folks to comprehend it. I used the murdered nuns as an example of that evil. That’s what I am referring to when I say ‘I saw nuns get shot in the back of the head.’ No one could possibly take that segment as reporting on El Salvador.”

Media Matters president Bradley Beychok argued, according to the Huffington Post: “Now that he’s been exposed as a serial fabricator, Fox News should hold him to the same journalistic standards that any news organization would or else admit that their network is a joke not journalism.”

“I’ve seen soldiers gun down unarmed civilians in Latin America, Irish terrorists kill and maim their fellow citizens in Belfast with bombs,” O’Reilly said in a 2013 book, according to the Washington Post.

Then in February, he said “We went on a raid in Divis Flats with the police. And it was a pretty intense situation. There was stuff being thrown, arrests being made, all of that.”

The Washington Post reported, “Asked about O’Reilly’s statements Friday, a Fox News spokesman said that O’Reilly was not an eyewitness to any bombings or injuries in Northern Ireland. Instead, he was shown photos of bombings by Protestant police officers.”

Did he witness a suicide? Challenges raised

O’Reilly has said he “heard” the shotgun fire when George de Mohrenschildt, a friend of Lee Harvey Oswald, died by suicide in 1977 in Florida.

He made the claims in his 2012 non-fiction book Killing Kennedy. O’Reilly wrote: “the reporter knocked on the door of de Mohrenschildt’s daughter’s home, he heard the shotgun blast that marked the suicide…that reporter’s name is Bill O’Reilly.”

But in a Feb. 24 report, Media Matters reported, that wasn’t true.

Doubts about O’Reilly’s claims were raised in 2013 on JFKFacts.org, and Media Matters interviewed “former O’Reilly colleagues” who denied O’Reilly’s account of events.

Media Matters noted that O’Reilly didn’t say he was there when he reported on de Mohrenschildt’s suicide during a 1992 Inside Edition segment. “Moments before he was to be interviewed by House investigators, de Mohrenschildt blew his brains out with a 20-gauge shotgun,” O’Reilly said.

And, the investigation report into de Mohrenschildt’s suicide “extensively details interviews with numerous relevant parties, [but] makes no mention of O’Reilly.” Further, Gaeton Fonzi’s 1993 autobiography said O’Reilly called him to ask if it was true that de Mohrenschildt killed himself.

O’Reilly’s publisher for Killing Kennedy, Henry Holt, stands by O’Reilly. A statement sent to iMediaEthics by VP, Director of Publicity Patricia Eisemann, reads: “We fully stand behind Bill O’Reilly and his bestseller ‘Killing Kennedy’ and we’re very proud to count him as one of our most important authors. This one passage is immaterial to the story being told by this terrific book and we have no plans to look into this matter.”

What about L.A. Riots?

O’Reilly has said “concrete was raining down on us” and “we were attacked by protesters” when he covered the 1992 riots in Los Angeles for Inside Edition.

Kirkham, who the Guardian said was “the lead reporter on the riots” told the Guardian, “It didn’t happen. If it did, how come none of the rest of us remember it?”

Instead, “several members of the team” said there was one incident when one person “smashed one of their cameras with a piece of rubble” in retaliation for O’Reilly’s actions, the Guardian said. According to the Guardian:

“Two of the team said the man was angered specifically by O’Reilly behaving disrespectfully after arriving at the smoking remains of his neighbourhood in a limousine, whose driver at one point began polishing the vehicle. O’Reilly is said to have shouted at the man and asked him: “Don’t you know who I am?””

McCall told the Guardian “it was one person with one rock” and that “nobody was hit.”

In response, Fox News pointed iMediaEthics to this Inside Edition video clip posted on YouTube interviewing the three reporters at the time. Bonnie Strauss that Fox News says negates her claims to the Guardian. “People were throwing rocks and bottles at us,” she said on Inside Edition.

Tony Cox said, “I was concerned but I wasn’t afraid.”

Rick Kirkham said “It looked like a warzone” from the helicopter.

See the Inside Edition video below.