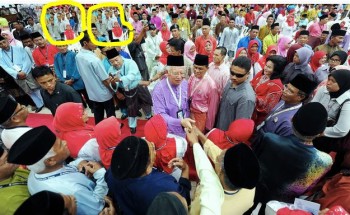 See above the image in question. Using the photo trick of cloning, people in the crowd are duplicated. We circled with yellow examples. (Credit: Bernama via Upper Caisse, screenshot, yellow mark added)

Malaysian “national news agency” Bernama admitted to publishing and distributing a Photoshopped picture, the Malaysian Insider reported.  As Malaysiakini and blogger “Upper Caise” explained, the photo was fake because it used “duplicates of the crowd in the background” at “a function for Umno president Najib Tun Razak.”

We circled with yellow above to show some of the duplication, which can be made through the photo trick of cloning.

Bernama’s website states that “most Malaysian newspapers and electronic media and other international news agencies are BERNAMA subscribers.”

Bernama’s editor-in-chief Datuk Yong Soo Heong is quoted as explaining that “Initial checks revealed that the flawed picture was discovered at the source from where it was sent.”  Further, Yong added that

“We are viewing this matter seriously and will not hesitate to take appropriate action against those responsible for the irregularities. Bernama always strives to maintain high standards of professionalism and takes a serious view of workplace integrity.”

The New Straits Times added that Yong said the agency is looking into how the photo faking happened. We wrote to Yong seeking more information about the investigation and how many outlets published the altered photo, but Yong told iMediaEthics by email that he “can’t say much further now” as Bernama is “still investigating.”

Blogger “Upper Caise”reported Sept. 19 that the faked photo has been “quietly taken down” from Bernama’s site, and its link to the photo on Bernama’s website currently redirects to a “Resource not found” page.

Reporters without Borders ranks Malaysia 122 out of 179 on its 2012 Press Freedom Index.

We wrote yesterday when South African newspaper the Citizen apologized after Photoshopping out two bodies from an Agence France-Presse photo it used for its front page.

Check out all of our stories on Malaysia. We wrote earlier this year when the New Straits Times, which “Upper Caise” wrote published the faked photo, apologized for and retracted  a story that misquoted an Australian Senator. A month after that retraction, the paper again retracted and apologized for another article that it said had “no truth or basis to.”  That article made accusations against “Malaysian politician and lawyer” Karpal Singh.