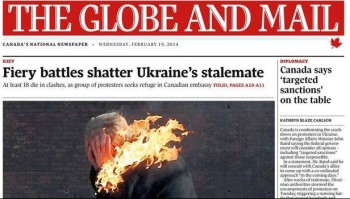 On Feb. 19, The Globe and Mail published a graphic front-page photograph of a man on fire in Ukraine.

The image shows the man with his hands over his face and fire blazing over his shoulders and neck. It was taken by Efrem Lukatsky for the Associated Press during this month’s violent protests in Ukraine.

The Globe and Mail received complaints over the graphic nature of the photograph and the lack of information about the burning man, public editor Sylvia Stead wrote.

Stead told iMediaEthics by e-mail she received four complaints about the photo by the time of her column’s publication. “Another three” were filed after her column was posted, she e-mailed iMediaEthics.

Readers also questioned what happened to the man, but according to Stead, the newspaper hasn’t been able to find out. “When it comes to informing the public about crucial events, there are times when personal dignity must take a back seat and, unfortunately, when the story simply has no ending,” Stead wrote.

iMediaEthics has written to the Associated Press, where the photograph originated, to ask if the photographer bothered to learn the name of the man or followed up to determine what his current medical condition is.

Stead told iMediaEthics how The Globe and Mail tried to track down the photo’s backstory. “Our photo editor contacted The Canadian Press photo desk and their editor in turn contacted the Associated Press asking for any more details available on the photo and the man. We heard back that the photographer was unable to provide any additional information at the time.”

Stead’s column pointed to the historical importance of publishing certain graphic photos such as images from the World Trade Center after the 9/11 attacks.

Stead also cited The Globe and Mail’s editorial code which permits the publication of graphic photos if “historically relevant.”  The code states, according to Stead:

“Showing dead bodies, bloodied victims and traumatized survivors of bombings, massacres and other tragedies is justified provided the image is historically relevant and/or advances the story in a serious and considered manner; conveys information relevant to the story; and is not intended primarily to shock readers or viewers.”

In 2012, the Washington Post’s public editor-at-the-time, Patrick Pexton, was in the same shoes as Stead, having to explain why the newspaper published a photo of a man on fire. The image showed a “Tibetan exile who set himself afire” in protest, Pexton’s report said. The Post said it decided to publish the photo because of its newsworthiness and importance.