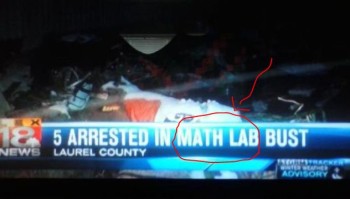 Wait, a MATH lab? Were the perpetrators misusing pi? Making illegal shortcuts on their long division?

Nope!  Lex18 meant to say meth lab in its on-air report, but made an apparent typo.

An image of the error is posted on WeKnowMemes.  A spokesperson confirmed to iMediaEthics by phone today that the station erred by  reporting that the arrests were related to a math lab– not a meth lab. “It was an error,” the spokesperson said.

A person who didn’t want her name revealed said that she didn’t want to help us with our story because it’s “embarrassing.”

Check out Lex18’s news story on the arrests related to the meth lab.